Ever since we started combining our TV’s with our speakers a few decades ago, surround sound systems have been moving forward. Today’s producers pay more attention than ever to the audio soundtrack of a film and if you have a great home theater system, you can easily hear how much better things have gotten since the early days of home theater. Surround sound formats have advanced so much over the years, we thought it would be fun to look back at how it all got started which does help give us some insight on where things might be going in the future.

The year was 1984, Miami Vice was the first television show to be broadcast in stereo. You needed a stereo VCR, an amplifier, and a pair of speakers to listen to it. The improvement in sound from the tiny speaker inside the 20-27” TVs of the time was simply amazing.

The industry soon figured out that with all that great sound, it was harder to understand what the characters were saying on the screen. With just two speakers, the dialog was getting blended into the left and right speakers along with the music and special effects. Dolby Laboratories came to the rescue with Dolby Pro Logic and the addition of a center channel speaker and two surround speakers.

Their process took anything mixed in mono (which was always the dialogue track) and sent it out to the center speaker. Dolby Pro Logic also extracted some ambient effects from the left and right tracks that became the surround channels. As a result, 5 channel surround was born. Bear in mind, these 5 channels were all being interpreted from a basic stereo audio mix.

Then along came Dolby Digital. This was a huge breakthrough because each speaker was assigned a channel. We finally had a discrete 5.1 channel system! Surround sound no longer relied on guessing; the actual information was there. Dolby Digital allowed the producer of the audio track to assign sounds to each channel and balance how much went where.

This greatly helped surround effects become more immersive as the engineer had the freedom to mix say 20% to the front and 80% to the back on one effect, and possibly 50/50 on another, enabling sounds to travel from front to back in our rooms. Other audio formats evolved, including DTS, TrueHD, and DTS HD Master Audio, which all relied on the individual channel technology. 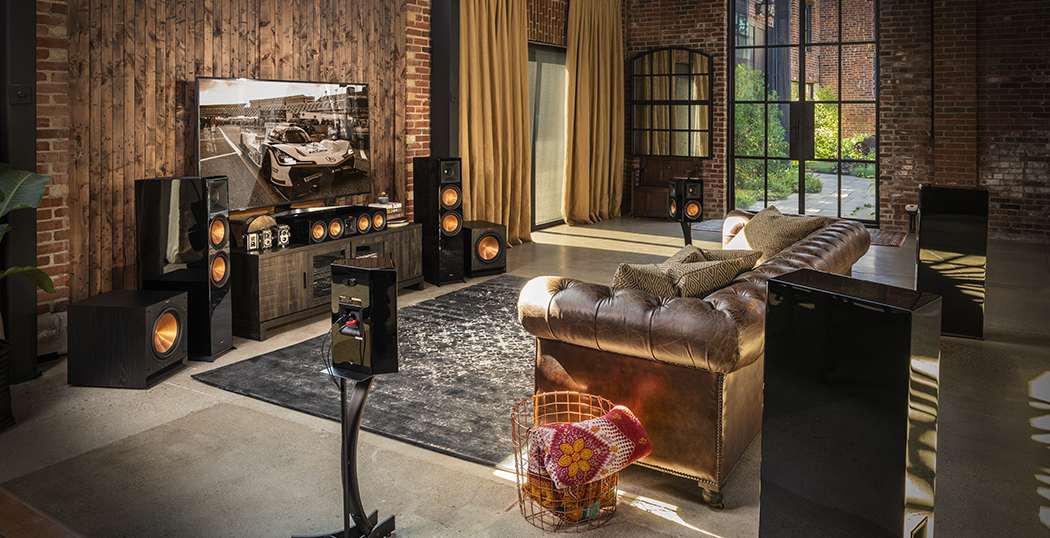 This brings us to the present day and Dolby Atmos. Are you starting to notice a common name in all of these? Yes, Dolby Laboratories has played a huge role in advancing home theater technology over the years. Dolby Atmos is as big a jump forward, if not more, than Dolby Digital. With Dolby Digital, the engineers just basically have a front to back and left to right fader to assign sounds with. What if your room could be mapped as a three-dimensional cube and the engineer could assign sounds to appear at any exact location?

Dolby Atmos was originally designed for large commercial cinemas with up to 128 discrete channels. A typical Dolby Atmos home setup will have fewer channels but still provide you with an incredible experience. With object-based sound mapping today, engineers can literally make it sound like a fly is buzzing around your head or give you the sensation of raindrops falling on top of you. For most homes, a full-blown Dolby Atmos system will consist of the left and right speakers, the center channel, a pair of surround speakers, a pair of rear speakers, and 4 Atmos speakers.

The idea with Dolby Atmos is to surround the main seating area with speakers. The speaker layouts and positions are also different than what we strove for with Dolby Digital. With Dolby Digital, in order to add some height to the sound, the surround and rear speakers might be positioned higher or in the ceiling to add that sense of height. For Dolby Atmos, we want our surround speakers on each side of the main seats at ear level. The rear speakers ideally should also be about ear level and behind the main seats. The Atmos speakers (sometimes called height speakers) which can either be in-ceiling overhead speakers or upward-firing Dolby Elevation speakers provide the sound from above.

This layout has sound coming from all around you at ear level and from above you from the height channel Atmos speakers. You are literally sitting inside a dome of sound coming from all around you and precisely located in space by the Atmos system. When a Dolby Atmos system is properly calibrated, the immersive effect you get on a great soundtrack will put a big smile on your face! 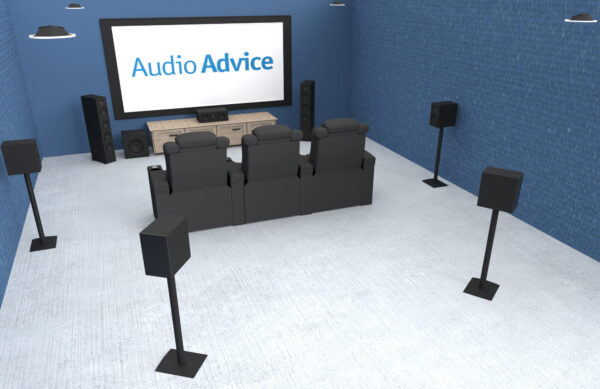 Example of a 7.1.4 Dolby Atmos System

The whole idea of a home theater experience is to make you believe you are in the movie. With Dolby Atmos, the sound is just so incredible, and therefore gets us much closer to that elusive feeling of being right in the center of the action.

Another really great feature of a Dolby Atmos system is how it can upgrade all of your older non-Dolby Atmos content from all of those great movies you own or ones that are not full-blown Dolby Atmos. The Dolby Atmos system will take an incoming 5.1 signal and interpret where all of the channels should be used. With your Atmos speaker system, this gives you sound far better than Dolby Digital ever could.

We see home versions of Dolby Atmos adding an even larger number of speakers as time goes on. For larger rooms, there will be speakers at ear level in between your main left and right and surround speakers. There will also be front height speakers found above your left and right speakers. And for larger rooms, 6 Atmos in-ceiling speakers will probably become the norm. Of course, this is six more channels than the current 7.4.1 system for a total of 17 powered channels! With that many amplifiers, this type of system will be limited to the larger receivers and separate components, but from what we have heard at trade shows, prepare to be even further amazed!

As you start to learn about your home theater options, you’ll need to make a decision in one of three directions. Do you go full blown Dolby Atmos now? Do you plan to enable it to be a future upgrade? Or, do you settle for a more basic surround sound with Dolby Digital?

The choice is up to you, but if you want to smile every time you watch a great movie, we feel you should definitely make the jump to Dolby Atmos! The great part about any good home theater setup is that it is very modular so with proper planning, you can start out with the basics and later upgrade to a full-blown Dolby Atmos system. 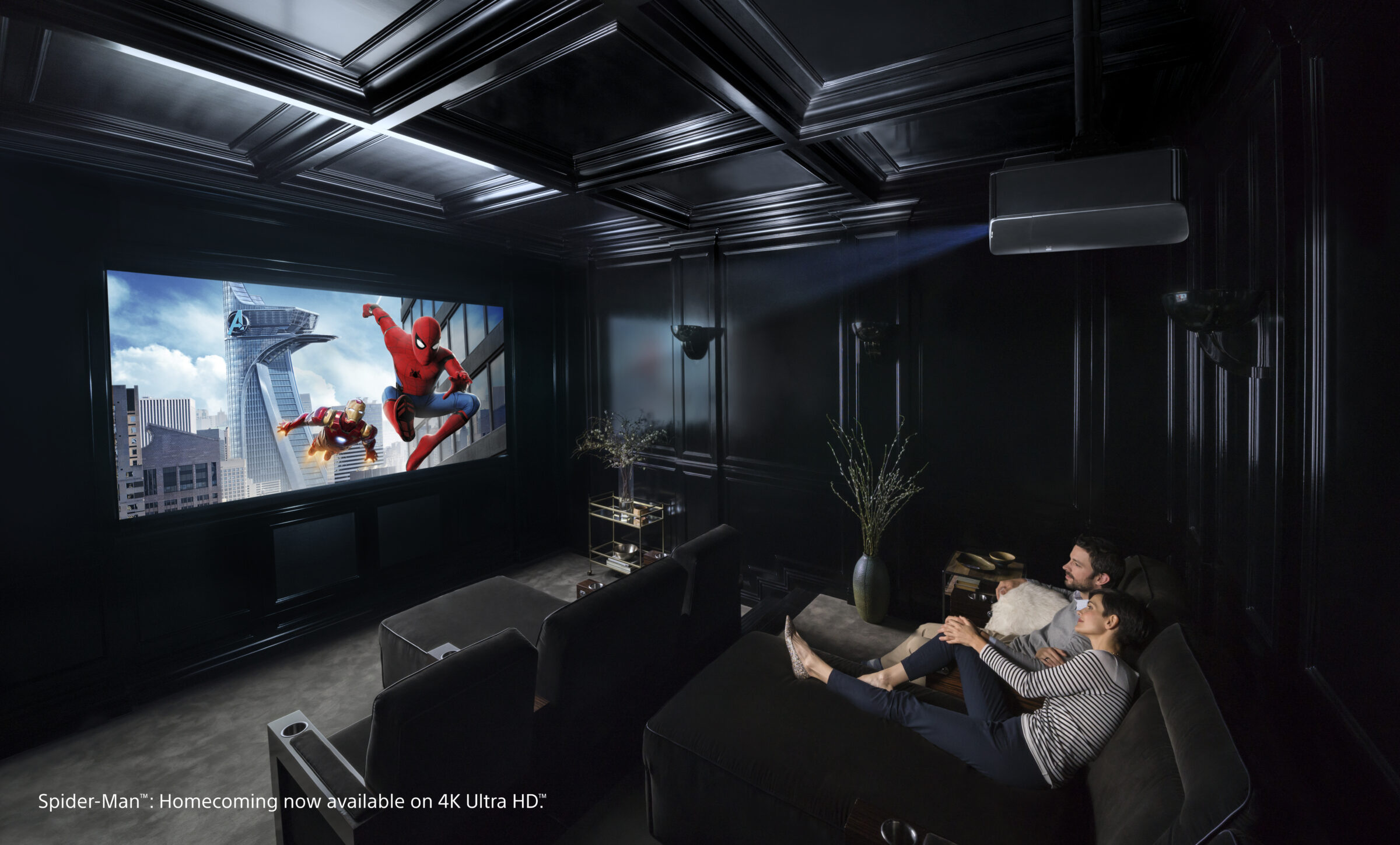 When we look back at our decades of experience in home theater, you can also spot some trends that might help you in allocating your home theater budget. Historically, we have seen video technology advance at a far more rapid pace than audio. Speaker systems easily last 20 years or more, but a 20-year-old TV seems like a dinosaur. We also see speaker systems going up in price over time due to raw material costs, but video prices remain stable and even drop for better technology.

This means, at least to us, it makes sense to invest in speakers now and if you have to cut corners, do it on the video portion as history shows next year’s video products will be better and usually less expensive.

We hope this brief overview gives you some good insight into the world of home theater surround sound and how it’s moving towards more involving sound!

If you are in the market for a new home theater system or improving part (or all) of the one you already own, you’ve probably figured out that the options can be more confusing than advanced algebra! Explore our guide to understand the available options and how they might work or not work in your particular situation. If you need help customizing a solution for your space, reach out - we're happy to help! 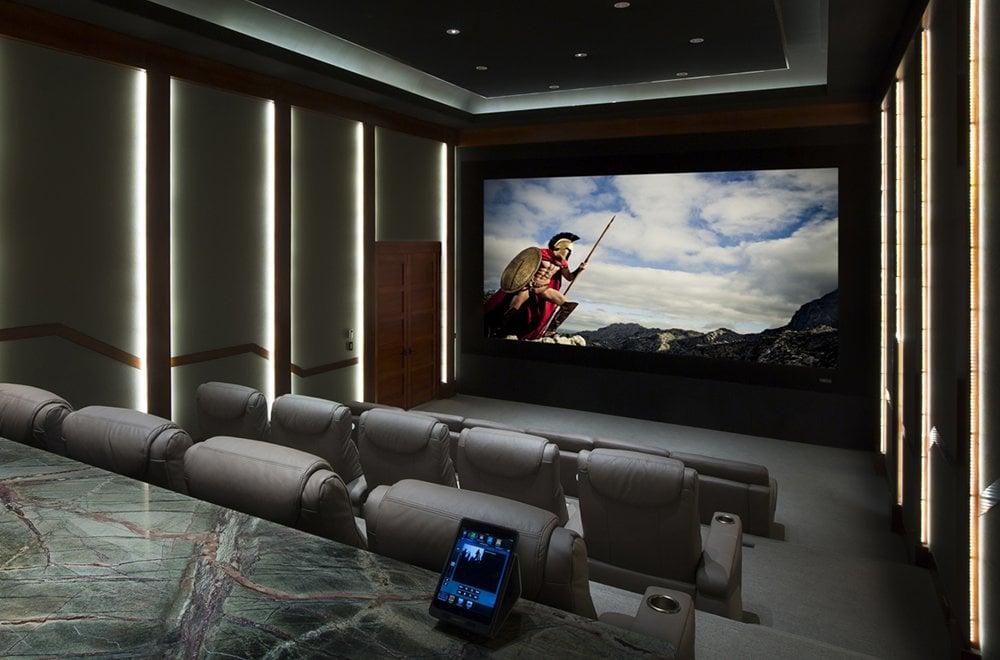 How to Choose the Best Home Theater Screen Size

Learn how to choose the best size for your TV or front projection home theater system. We’ve culminated in the advice of the movie industry and our years of experience with real-world home theaters to take the guesswork out of helping you choose the perfect screen size. You’ll just need a tape measure and a calculator. 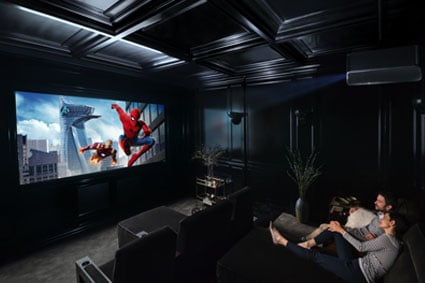 If you’re a movie lover, you’ve probably noticed that when you play your favorite Blu-ray or streaming movie, you will usually have black bars at the top and bottom. We know that this can be confusing, so we’re going to explain why this is happening as well as some things to try that may even fix the issue, depending on your individual sys... 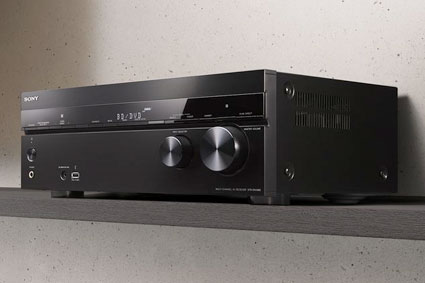 How to Choose a Home Theater Receiver

Learn about technologies and features you should look for in a new audio-video receiver for your home theater. We will make it easy to decide which features are important for your system and which ones you may not need to worry over. 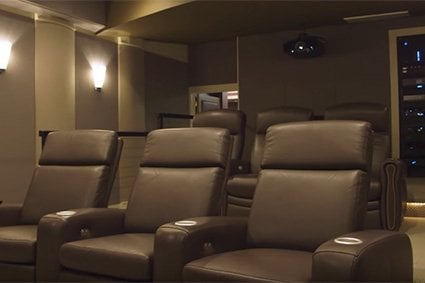 Recent changes in technology on both the video and audio front have aligned to make now the best time in the last two decades to invest in a new home theater. From 4K video to the immersive widescreen experience, to Dolby Atmos surround sound, and technology to improve your room’s acoustics, we have never seen a convergence like this before.<... 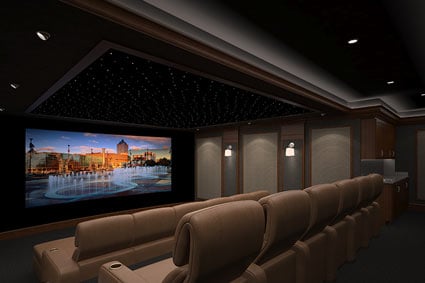 A Guide To Home Theater Acoustics

A guide on how to get the best sound out of your home theater room. We have some tips and tricks to greatly improve the way your home theater sounds. You’ll learn about how to use some basic things around the house to enhance your acoustics and how to choose aftermarket acoustic treatments. 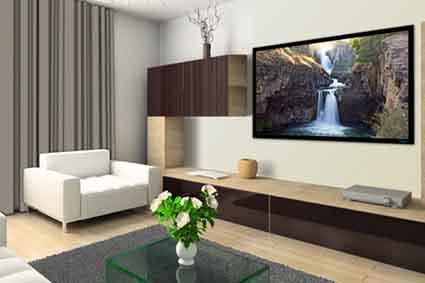 How To Choose The Best Front Projection Home Theater Screen 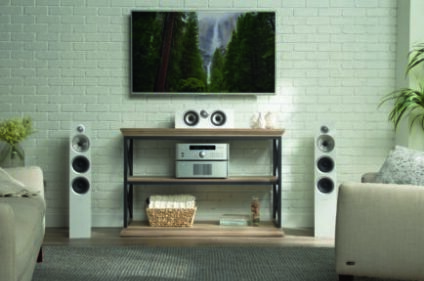 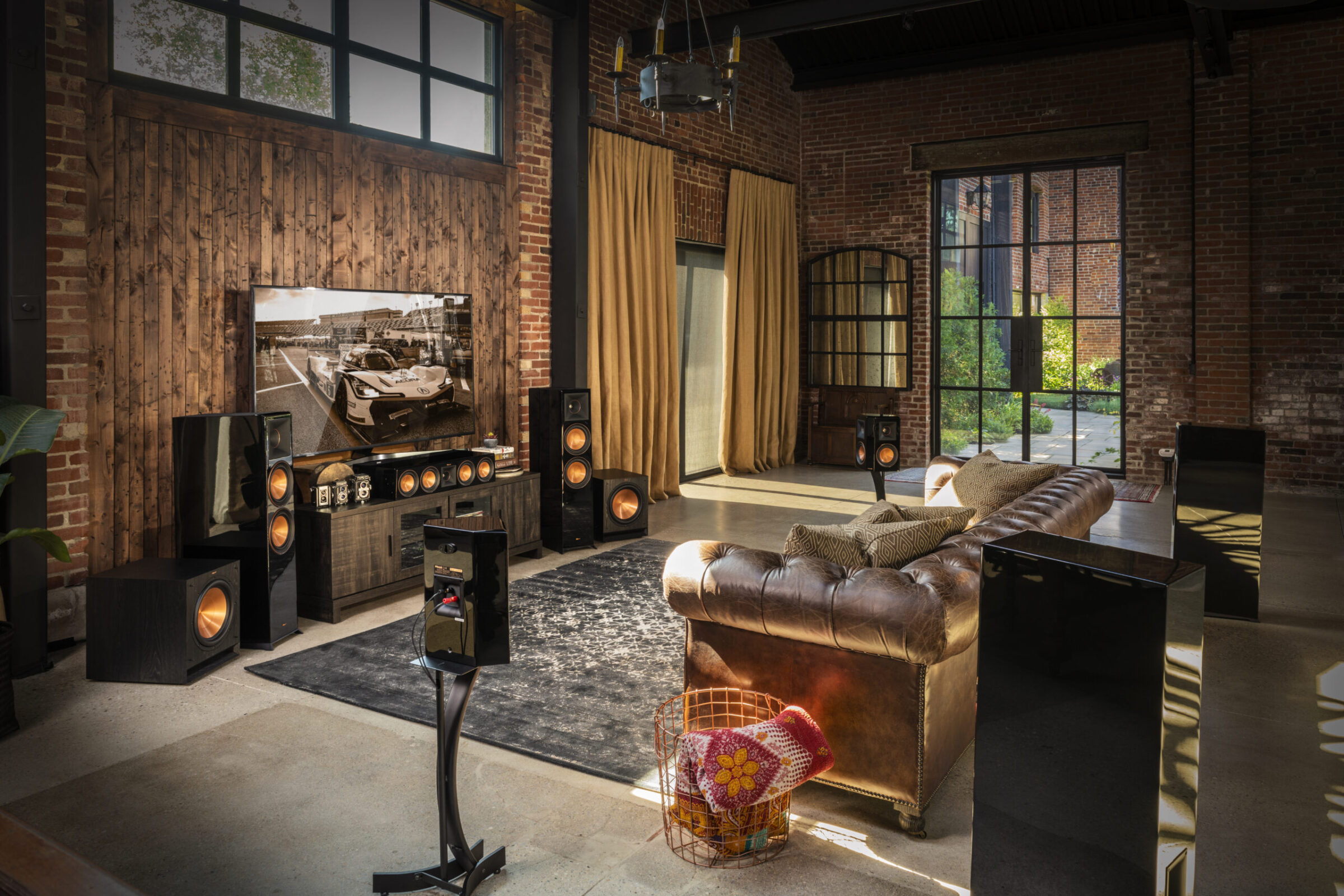 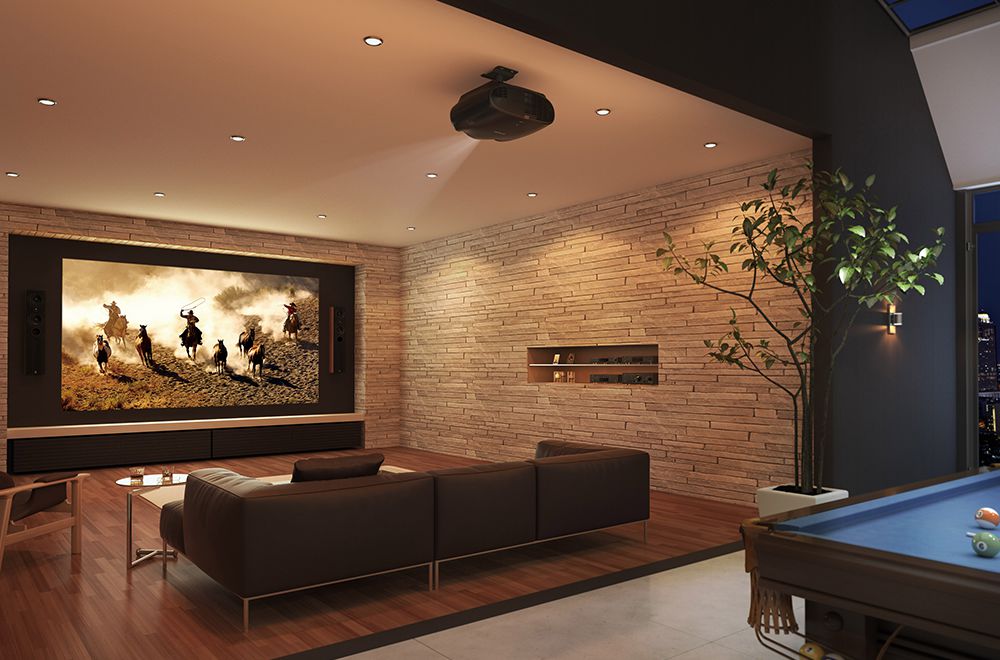 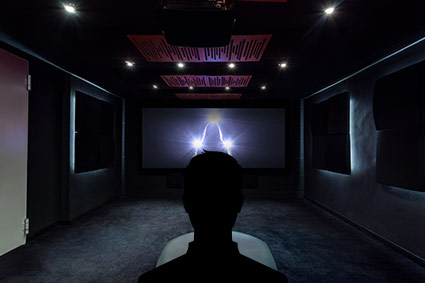 The Importance of Sight Lines in Home Theater Design

Do you remember the old movie theater experience before stadium seating? Think back to that person with the big hat or huge shoulders sitting right in front of you blocking your view of the screen. You had to spend the whole movie leaned over to one side to see the screen. A well-designed home theater requires detailed planning of sightlines, vi...