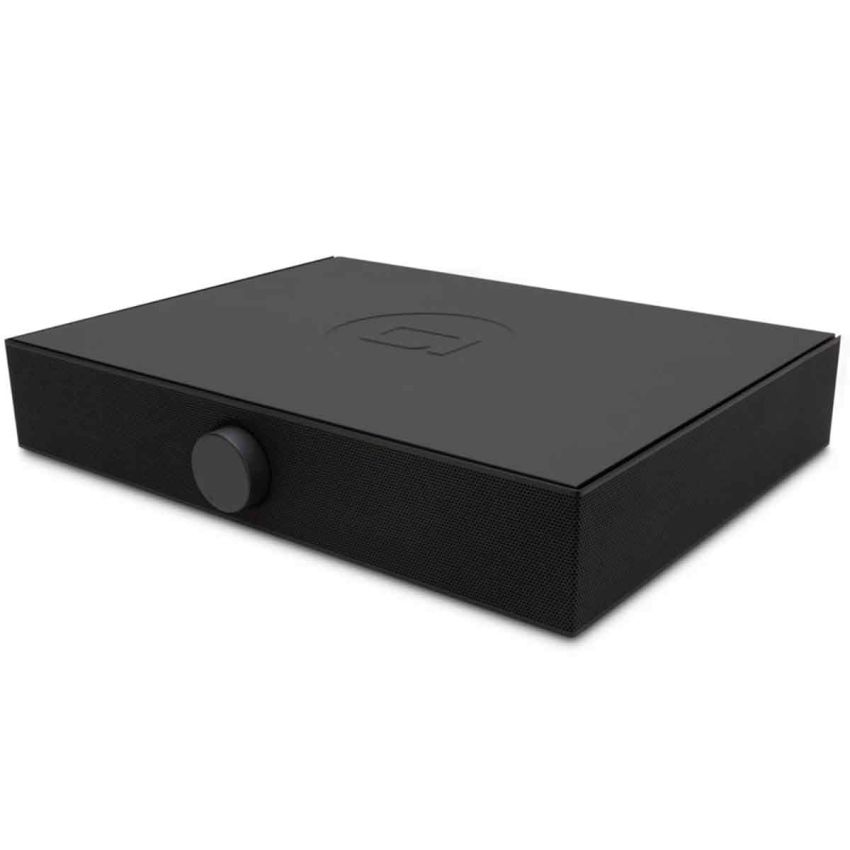 Spinbase is a compact all-in-one powered speaker system for turntables with room-filling, 270º sound, and feedback-free performance. It packs room-filling sound, simple operation, and easy connectivity in a compact package that sits comfortably under your favorite turntable. Spinbase includes Bluetooth for playing music wirelessly. 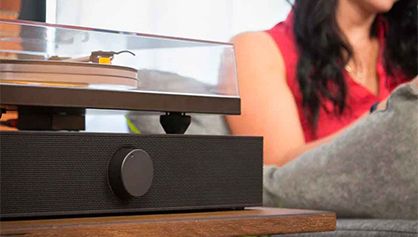 The Spinbase only takes up the same space as your turntable but adds a complete playback system that fills your room with big sound. 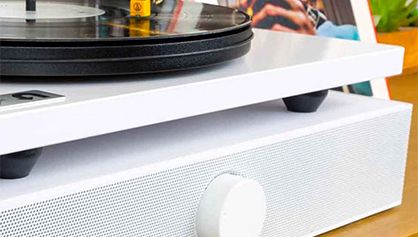 The engineers at Spinbase went for a warm, rich sound which is perfect for vinyl and all music. 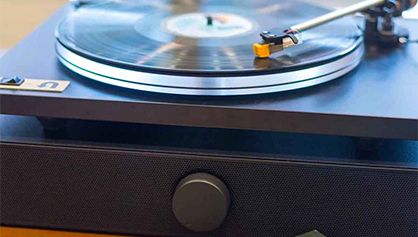 Not only does the Spinbase do vinyl, but you also have Bluetooth 5.0 and an analog input making it a complete system center.

Andover Audio is a pretty interesting company. They were founded in 2012 by several home technology industry veterans led by Rob Mainiero, formerly with Cambridge Soundworks. This team of designers and engineers from the likes of Apogee Acoustics, Acoustic Research, Harman, Bose, and a/d/s/ set out to be more of an OEM designer and manufacturer for the telecommunications, automotive, and high-performance audio industry.

With their fingers in multiple parts of the consumer electronics industry, the team based in North Andover, MA realized there was a huge growth happening in the resurgence of vinyl and a lack of super high-quality all-in-one vinyl playback system. The big issue of having an all-in-one unit is, of course, the fact that it's not a good idea to have your turntable super close to your speakers.

The Andover Audio engineers set out to solve this problem and did so with a new technology they call Isogroove™. This great tech allowed them to put a turntable directly on top of the pair of speakers. Andover Audio then teamed up with Pro-Ject Audio and coupled their Debut Carbon Esprit turntable with their isolation tech and a great amplifier/speaker combination.

The result was the Model 1, which was introduced in the fall of 2019 and immediately received tons of accolades from the audio press. This $2,500 all-in-one player is very compact and offered a full array of connections for today’s listener.

The Isogroove™ tech was too good to just relegate to a $2,500 player and they saw a much bigger potential to scale back the speaker package and design a box you could place your existing turntable on top of. Towards the end of 2019, they introduced the Spinbase, which is the subject of today’s review.

The Spinbase is an all-in-one speaker system in a very compact package that’s about the same width and depth as a typical turntable.

The Spinbase has a fairly retro look to it. It is available in a black or white finish and has a single large knob in the middle. At 18” wide,  13 ½” deep and about 3 ¼” tall, the size will accommodate just about any turntable you would likely use with the Spinbase.

A finely perforated metal grill wraps around three sides of the unit with more controls and inputs on the back. There is a large Andover Audio logo right on the top that your turntable will cover-up.

Since it's a little deeper than a typical bookcase, especially after you leave room for your turntable connection plugs, the Spinbase will not fit on a normal 12” deep bookshelf but will be right at home on any tabletop, desktop, or a small table.

Build quality is very good for the price of the Spinbase. It's not like you would get on a $1,600 Naim all-in-one unit or $3,000 McIntosh, but for the price, it is pretty darn good.  The volume control feels solid and there is absolutely no wiggle or wobble in it. The rear input connectors are pretty standard for what you would expect in this price category. You will need to have it fairly close to an AC outlet as the power supply is an external wall wart with a fairly short cord of about 5’ in length. Or, you could simply use an extension cord to extend it.

Overall, we love the look and feel of the Spinbase. Just about every turntable we plopped down on top of it looked great. The red Debut Carbon turntable with the white Spinbase was a big hit with the local NC State and Carolina Hurricane fans in the office too!

For its very modest price, we would have been impressed if the Spinbase just accommodated a turntable. It actually has two phono connections on the rear, one for normal magnetic moving magnet phono cartridges and another for ceramic cartridges. Ceramic cartridges are what you find on those el cheapo all-in-one “record players” you see sold in some record stores and big superstores like Target. Many of them do have an audio out which would allow you to connect up to the Spinbase and improve the sound, but we highly recommend you stay away from this type of turntable if you care about preserving your records.

The neat part is, the ceramic input can be switched with the flick of a toggle to be a line- in analog input to receive the output of a CD player, DAC or cassette deck.  Right beside the two sets of inputs you’ll find a handy bass and treble control and even a mini headphone jack.

The final icing on the cake from an input perspective is the addition of Bluetooth 5.0. Connecting was quick and simple and within seconds we were streaming Tidal to our test unit.

This is one heck of a great combination of inputs and controls that make the Spinbase a great all-in-one music center for your turntable. The great part is, other than its additional 3 ¼” of vertical space, the footprint for your new music system will not be much larger than the space your turntable already takes up!

If you noticed the history of where some of the people on the Andover Audio team came from and you have been following the audio industry for a while, you might start to figure out how this would be a dream team to make a compact system that sounded great. Cambridge Soundworks was known for decades as making the best sounding table radios ever. The sound they got out of their very compact designs amazed most people. a/d/s way back in the 1970s had one of the best sounding little speakers ever made that was super popular for high- end car audio systems. The list goes on.

Well, this skinny little box from Andover Audio delivers on warm, musical, room-filling sound for your turntable! They do it with what is basically a stereo pair of speakers using two woofers and two tweeters. We were so curious as to how it filled up the room with wide sound, we took our sample apart to have a peek behind the grill. There are two forward-firing dome tweeters on each end of the front panel and two oval midbass/bass drivers mounted on the sides firing out.

This configuration gives the Spinbase a 270 degree sound field that creates a really pleasant room-filling sound. Each speaker driver has its own individual power amp. There is actually right much area inside the Spinbase to develop some decent bass, which helps with the warm sound.

We should point out one of us is extremely sensitive to speakers being in perfect phase. When this person was positioned directly in front of the Spinbase, there was a slight feeling of something being out of phase, likely due to the woofers and tweeters not being lined up, but it was very slight and totally disappears when you move even slightly off-center axis.

One other piece of great tech that allows the Spinbase to even be viable is their Isogroove™ technology. It has always been a total no to put a turntable on top of speakers due to acoustic feedback issues. The team at Spinbase is using both mechanical and electronic compensation systems to eliminate any chance of feedback. We have to say, for $300, this is just an outstandingly good sounding product!

We gave the Spinbase a full gamut of testing using a Pro-Ject Debut Carbon as the turntable, a Chord Mojo as an analog input, and Tidal for Bluetooth 5.0 streaming. In each and every case, it provided a warm and rich sound, with never any trace of an edge. The tone controls are also very well thought out. Neither one has a dramatic effect and can be used more for fine-tuning. In other words, turning the bass control even wide open does not overdo the bass like we might have first expected. The treble is especially nice to back down just a shade on an overly bright recording.

The Spinbase turned out also to be a great background music player as it keeps its very warm sound even when you turn the volume down quite low. We also felt it sounded the best if you were right on top of it, but a few feet away. This is likely due to the 270-degree dispersion pattern they use. This does have some pros and cons. The pro is, for the casual listener, the sound it throws out into the room feels big and full. The con is, if you like to sit in the sweet spot and pick out a great stereo image, you would be better off with a powered speaker system.

The real surprise came when we cranked up the vinyl side quite loud. Their Isogroove™ tech really works!

The Spinbase is the perfect option for someone who has very limited space and wants to have good vinyl playback. You can buy a turntable without a phono preamp built-in, which allows you to get a better table for the same money, and use the built-in phono preamp.

Don’t get us wrong, the Spinbase is not as good as a separate pair of $4-500 powered speakers spread apart for better separation, but is a problem solver for space and someone who wants a lot of features. We actually can not think of a $300 pair of powered speakers that have a phono preamp, analog inputs and Bluetooth. You can spend another $50 and get something like the Peachtree M24 or Kanto YU-4, which do have these features and sound better, but they will both take up a lot more space and you need to spread them out some to prevent feedback when using a turntable.

Congrats to Andover Audio for coming up with such a cool product that will allow more people to set up a nice vinyl rig in an area with limited space!

Specs
Reviews 4
Write Your Own Review