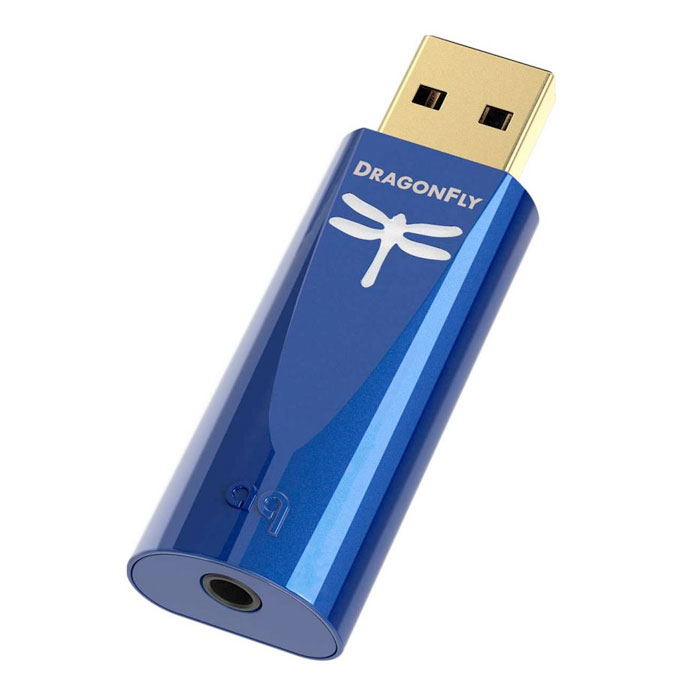 The brand-new and improved DAC by AudioQuest.

At Audio Advice, we have been fans of AudioQuest products for almost 40 years. Bill Low, the founder of AudioQuest, is a huge music lover who constantly pushes the AudioQuest team to innovate to improve sound. As a very successful company, AudioQuest has a decent sized sales force tasked with traveling around the country to see their dealers and attend consumer shows. When computer music started to become popular, their team, who is also made of up hardcore music lovers, stored lots of music on their computers but did not have an easy way to get better sound while on the go. You certainly don’t want to carry around home components when traveling. AudioQuest felt something tiny that could improve computer audio sound would fill a huge void in the audio market. This is actually what led to the creation of the original AudioQuest DragonFly in 2012.

The AudioQuest DragonFly Cobalt, featured in today's review, is the latest addition to the DragonFly family and promises to be the best sounding little bug yet!

If you are not familiar with the DragonFly family, the units look like a slightly oversized USB stick. They have a male USB connection that plugs directly into your computer or with an adapter to connect to your smartphone or tablet. They are powered off the USB connection so there is no need for a power cord. On the other end is a mini plug output that allows you to connect up to a pair of headphones or with a cable, plugs into an audio system or powered speakers. Inside the DragonFly is a USB DAC that bypasses the DAC in your computer or phone while greatly improving the sound. The output of the DragonFly is also far more powerful than the headphone jack on a computer or phone which helps your headphones really come to life. This tiny package will give you a remarkable improvement over the sound coming directly out of your laptop or smartphone.

While the parts inside the Cobalt come in from all over the world, all DragonFlys are assembled in the United States at an AudioQuest facility in Ohio.

The build quality of the DragonFly family has improved with each new version and we have to say the latest Cobalt model appears to be even better. It’s slightly smaller than the previous models by about 10% making it even more friendly for your pocket or laptop bag. The Cobalt’s blue sparkly automotive finish is very sharp looking and we love the way the little DragonFly logo changes color while plugged in to show you the status of the unit.

When AudioQuest set out to make the original DragonFly, they worked with Gordon Rankin on the design. Gordon is the founder of Wavelength Audio, the first company to improve computer audio with his USB DACs. Gordon is a brilliant designer of digital audio and is considered by many to be the inventor of asynchronous USB. Every one of the DragonFly models has featured his designs and he was up to the challenge with a slightly higher budget to make the new Cobalt even better than previous models.

For a side-by-side comparison of all the models in the DragonFly family, watch our DragonFly DAC Comparison.

Having enough output checks off one box, but being able to control it with zero noise is an entirely different challenge. The Red and new Cobalt both use a bit-perfect digital volume control which has an extremely high signal to noise ratio (this means its quiet!). It also works seamlessly with both Apple and Android.

AudioQuest gives you one of their DragonTail adaptors with the Cobalt which makes connecting up to an Android USB-C connector super simple. For an Apple device, AudioQuest recommends a Lightning to USB 3 adapter.

The technology inside the Cobalt is simply amazing! Gordon and the AQ team has crammed in almost 200 components inside the tiny case. While the DragonFly Red was spectacular for its price point, the new Cobalt has several improvements over the Red.

First, the DAC chip used in the AudioQuest DragonFly Cobalt is the new ESS ES9038Q2M DAC. This is a higher performance DAC than the Red and has a minimum-phase slow roll-off filter. Think smoother, more natural sound.

The processor is also improved. Not only is it 33% faster than the Red, but it has also reduced the current draw from the USB connection. AudioQuest also studied the noise from WiFi, Bluetooth, and cell phones that the DragonFly encountered while sitting very close to a cell phone or laptop. They found if they reduced this noise, the audio improved, so they decided to put more power supply filtering into the Cobalt to reduce noise.

In terms of audio file playback capability, the Cobalt can handle up to 24-bit 96Khz files and for MQA lovers, it is a full render.

The colors of the dragonfly logo will show the status of the unit. So, with just a glance, you can see what sample rate your little blue bug is streaming. The Cobalt's LED lights up with different colors indicating standby mode or sample rate: Red equals “standby-mode” — Green: 44.1Khz — Blue: 48Khz — Amber: 88.2Khz — Magenta: 96Khz. It’s that easy!

The Cobalt uses Gordon Rankin’s StreamLength®asynchronous-transfer USB code. Rather than using multiple clocks, the Cobalt uses his monoClock® technology. This ultra-low-jitter clock is generated from the ESS ES9038Q2M DAC chip and runs the ESS chip functions as well as all microcontroller functions. While that is a mouthful of tech, what your ears will hear is a big improvement in both clarity and resolution of low-level audio information getting you more involved in the music.

For audio geeks, technology is always fun to talk about, but the proof is in the listening. We had heard through the grapevine from a couple of people that had listened to the prototype that the Cobalt was spectacular which made us want our initial sample to get here sooner!

Both StreamLength and monoClock are registered trademarks of Wavelength Audio, ltd.

We decided part of our testing should be comparing the AudioQuest DragonFly Cobalt to the DragonFly Red, and why not!

For most of our testing we used the Audeze, LCD-3 headphone, the Audeze LCD-X, and on the more modest end the Grado Sr-225e. Ranging in price from just under $2000 a pair to just over $200 a pair, this gave us a wide range to test with. The LCD-3 is a bit hard to drive, but the other two are easy to drive. Our source was Tidal on a Windows PC. We immediately found the Cobalt had no issue at driving the LCD-3, at about 35% the volume was at what we would consider a high level.

We then set about listening to lots of different music and flipping between the Red and Cobalt. Some of the tracks we listened to were Tom Petty’s “Mary Jane’s Last Dance”; Keb’Mo’ has a great new album out called Oklahoma and we used the title track from it; another was Caroline Spence’s new album, Mint Condition where we used the track “Angels or Los Angeles”; and rounding out some classic rock, “You Can’t Always Get What You Want” from the Rolling Stones.

Our first listening was done on the Audeze LCD-3 and on the first few notes, we could tell the AudioQuest DragonFly Cobalt is really good. We tapped our toes all the way through “Mary Jane’s Last Dance”. Switching over to the DragonFly Red was very interesting. Every now and then you’ll hear a component that not only makes everything sound clearer but at the same time you get a lot more warmth and harmonic richness to the sound. It was like wiping away a layer of grunge off a window to see all the subtle colors of a beautiful sunrise. This is what the Cobalt did to the Red. Another aspect we noticed was improved rhythm and pacing on the Cobalt. We just got more into the music.

On both the Keb’Mo’ and Caroline Spence cuts, all of the instruments were separated much better, letting you pick one out and hear every nuance. We tested some deep bass passages and we feel they are very similar in their ability to produce very deep bass, although the Cobalt still sounded cleaner overall. The guitar on the Caroline Spence cut was just flat out more harmonic and much richer sounding. This AudioQuest DragonFly Cobalt DAC is really good!

We thought when we went to the $225 Grado SR225e, we would not be able to tell as big a difference, but were proven wrong. We compared the song “Angels or Los Angeles” and immediately heard an improvement over the DragonFly Red. Much better separation and harmonic details. Same with the LCD-X. We heard big differences every time we switched between the two.

After a couple of hours of listening, we have to give Gordon Rankin and the AudioQuest team a big round of applause for coming up with such a great product as the DragonFly Cobalt!

If you own a DragonFly Red and have a decent set of headphones or a good system you are running it through, you might want to find a friend who needs a good portable DAC and upgrade your DAC to the new Cobalt.

AudioQuest is also sweetening the deal on the first 10,000 Cobalts sold. They will come packaged with vouchers for trial subscriptions to some great music-streaming services – two months in the case of Tidal and one month of Qobuz.

Want to know more about upgrading your computer audio setup for even less? Watch our DragonFly DAC Comparison where we compare the other USB DACs in the DragonFly family. We think the flagship model, Cobalt, sounds the most beautiful, but for less $100, you will feel really good about getting the entry-level DragonFly Black or mid-level DragonFly Red.

The AudioQuest DragonFly Cobalt is a very special portable or at home DAC for only $299. If you have a DragonFly Red or Black or the original DragonFly, you will love the improvements, especially if your headphones or system are of decent quality. Don’t get us wrong though, the Red and Black are great products, but it's like we said earlier, once you hear the difference, it's hard to go back.

Who it’s for: Music Lovers

What it’s for: All Kinds Of Music

How to get peak performance: At Home or On-The-Go 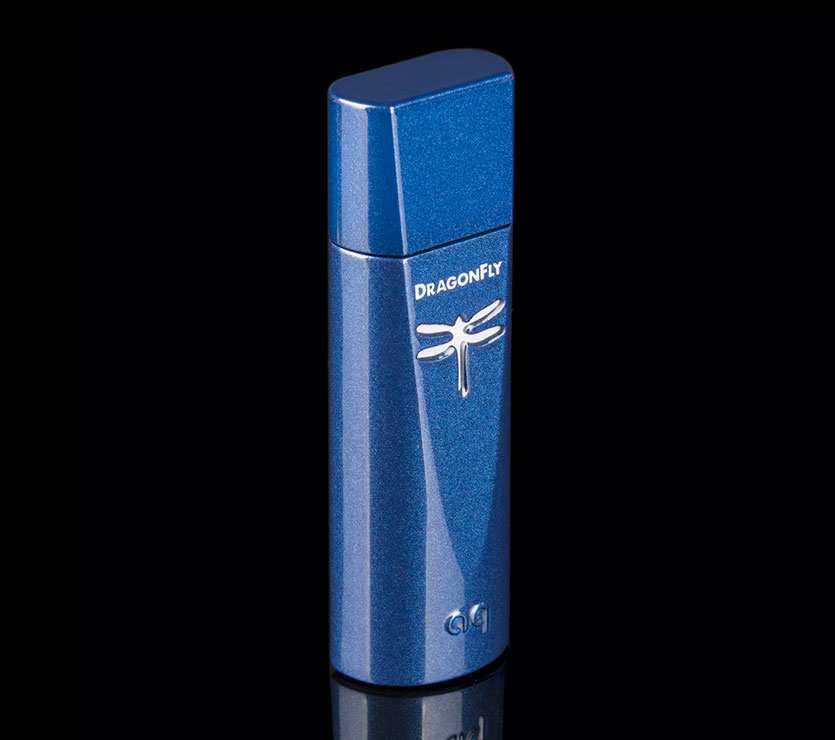 Designed by who many people consider the “Godfather” of USB DACs, Gordon Rankin brings his years of digital experience to the DragonFly Cobalt. 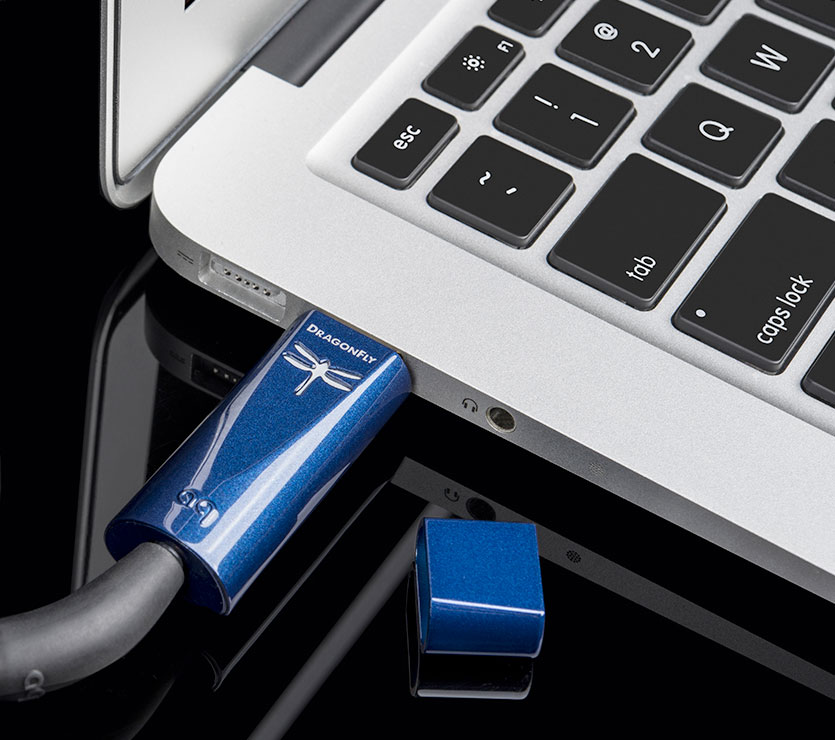 The difference you will hear on a good set of headphones or speakers between your computer headphone out and the DragonFly Cobalt will make you want to start playing all your favorite songs to hear them for the first time. 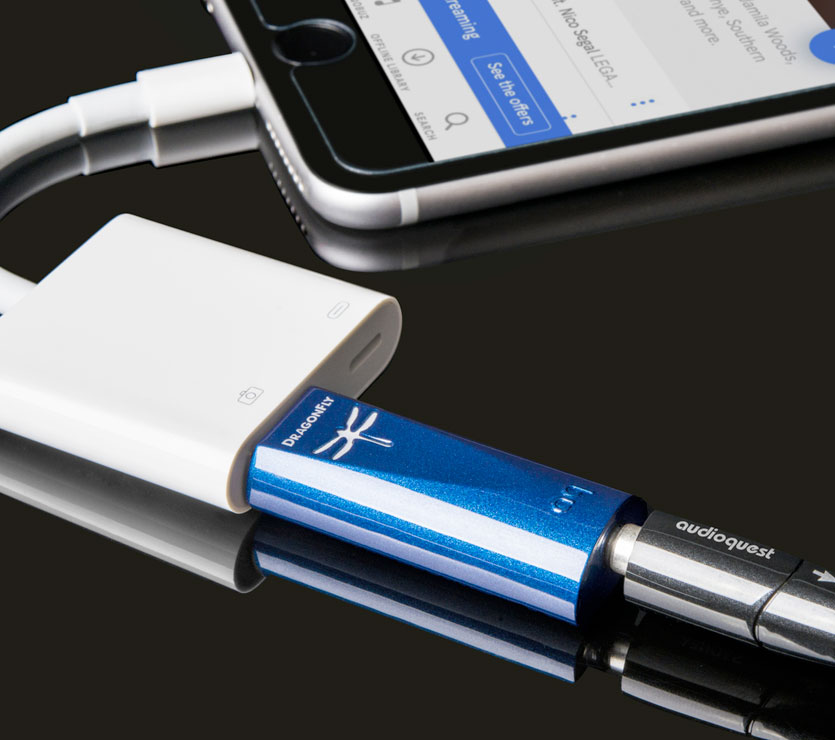 High-End Components in a Tiny Package

Hats off to AudioQuest for not compromising and putting audiophile level components in the tiny DragonFly Cobalt package. A remarkable achievement! 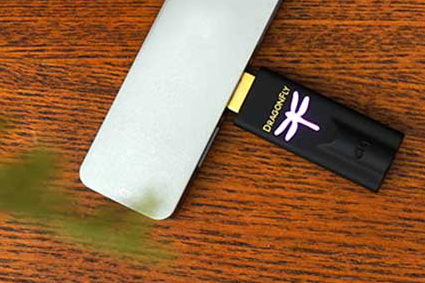 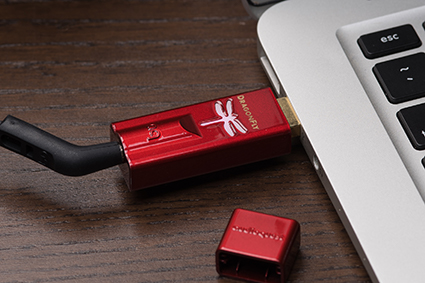 DragonFly Red offers next-level performance for only a slightly higher price-point. It’s the little bug that will satisfy the most demanding audio enthusiasts. Read our review, and enter the DragonFly Red! 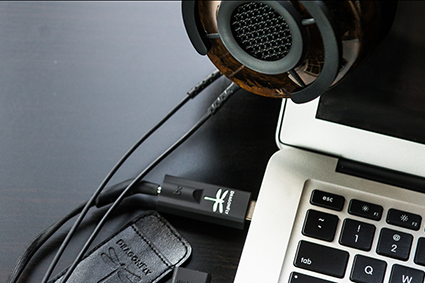 What is a DAC and How Does it Work?

Ever wonder what’s going on inside your audio equipment? How does the audio data on a CD, MP3, or WAV file stop being data and become sound? That “magic” is in large part thanks to a digital-to-analog converter, or DAC.