Audio Advice has been a Bowers & Wilkins (B&W) dealer since the early 1980s. For almost 40 years, we have seen them push the limits to produce the best possible sound. Of all the speaker companies we have dealt with in our history, none of them spend the money on R&D that B&W does, and none of them have made such consistently great sounding products for decades.

About three years ago, we started to hear some rumors about Bowers & Wilkins coming out with a new series designed to bring wireless home audio to a new level. We knew if they were going to jump into this business, they would take their time, do it right, and come out with products that were far better than the competition and likely easier to use.

Bowers & Wilkins was launched over 50 years ago by John Bowers and Roy Wilkins. After they produced their very first speaker, which used components from other companies, they took all of the profits and poured them back into the company so they could make a speaker using parts all made in house. After 50 years, this philosophy has never changed. B&W always designs, manufactures, and assembles everything in their own facilities, never using outside parts. When they want to improve upon something, they will spend millions in R&D to come up with what is truly a better solution.

The category of wireless home audio has grown tremendously over the last ten years. We’ve seen a few companies have success, and others make a big splash and then fade away. Due to the networking and software nature of this part of the business, it does take deep pockets and great engineering to create a successful product. B&W made a decision to fully analyze the wireless category and design a new type of system from the ground up.

After signing some NDAs, we had the privilege of getting a sneak preview of the new wireless product line up from Bowers & Wilkins. As we expected, we were not disappointed!

The new series is called Formation and currently consists of 5 new products. Bowers & Wilkins obtained over 70 patents on the technology they developed for the new Formation series.

Wireless music systems have a different problem set than a hard-wired system. Set up can be tricky to start with, but even once you get things set up, there can be dropouts in audio and delays from room to room and between components in the same rooms. B&W wanted to eliminate all of these issues with Formation. They looked at the three aspects of wireless that all happen at the same time in most wireless systems: communicating with your wireless network, keeping a pair of wireless speakers in the same room in perfect sync, and keeping all of the wireless speakers in your home in perfect sync. After much testing, they came up with a system that uses multiple wireless antennas for each of these purposes. With this system, they have virtually eliminated the problems that can plague a wireless audio system.

We also have to give them credit for creating a system that is super easy to set up. The one we tested was up and running in about 2 minutes, and once the first piece is set up, the others just take seconds. The interface is clean and very easy to understand.

The first five products in the Formation series cover a lot of bases. The one we got to experience is called Duo, a pair of wireless speakers that look a lot like their 805 bookshelf speakers. They can sit on an optional stand or on a cabinet/shelf. These have similar speaker components to Bowers & Wilkins’ 705 speakers and we have to say, they sounded fantastic! These new speakers allow you to have a complete music system with just two speakers that provide outstanding audio quality. Due to the fact that they are powered and have EQ to enhance the deep bass, they produce bass down to around 25hz, which is amazing for a small speaker. The three-dimensional sound stage they threw out was just incredible. Being powered also gives the advantage of having great dynamic impact. It is rare that we tap our toes to a wireless music system. We have to say, Bowers & Wilkins figured out the timing issue with wireless systems, and we were quickly tapping our toes after music started up on the Duos. The Duo will sell for $3,999/pair and comes in a black or white finish. 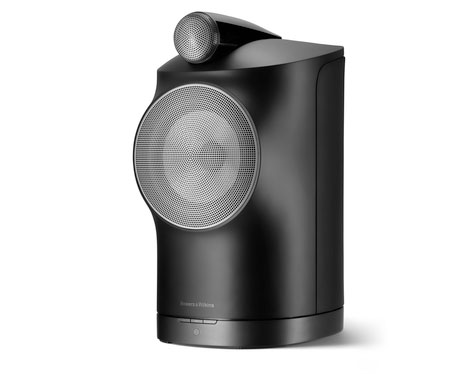 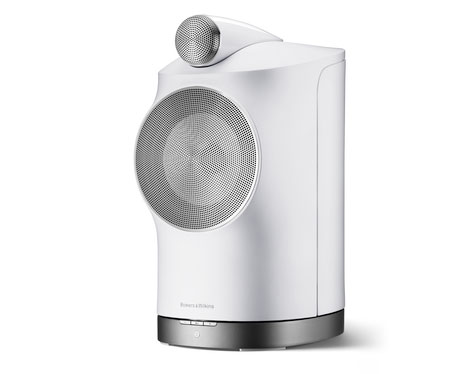 The next piece in the lineup is the Formation Bar. As you might guess, this is a powered soundbar. The look is contemporary to match today’s flat panel TVs. We love that they elected to go with an optical input from your TV rather than trying to use the audio return channel via HDMI because optical is 100% reliable. This speaker has nine drivers with a dedicated center channel speaker system to make the dialogue incredibly clear. It has auto sensing that will switch from music to the optical input when your TV turns on. Like most good soundbars these days, it can learn the volume functions of your TV remote. The Bar will sell for $1,199. While we have not heard it yet, in looking at the design, we expect it to be one of the best sounding bars we have experienced.

A piece called the Wedge is Formation’s all-in-one music speaker. The Wedge has a dedicated subwoofer in the center and a pair of midrange and tweeter drivers on each side of the Wedge to really fill your room with big sound. We have to say, this is probably the largest all-in-one speaker we have ever seen, but the Formation team did a really cool job of making it look small with its faceted front grill. The back side of the Wedge is a hard, curved surface. The Wedge comes in black or silver, and if you get the black model, the rear surface is a wood veneer. The Wedge will be $899.

Full range music is all about deep bass and Bowers & Wilkins did not want this lacking in any room. The Formation Bass is their wireless subwoofer and it looks like a small faceted barrel. A long throw bass driver is on each end in an opposed pattern. Bowers & Wilkins claims the Bass subwoofer will get down to 20hz, which is very impressive for its small footprint. You can couple the Bass to the Bar, Wedge, or Duo. This is one we are really looking forward to hearing as Bowers & Wilkins subwoofers have historically given us amazing sound for the money. The Bass will be $999.

For those of us with existing audio systems who want to get into the world of wireless, or for the person who wants to add some Formation wireless speakers around their home and be able to sync them up with their current wired audio system, Bowers & Wilkins Formation Audio will be the perfect solution. Audio is a stand alone piece of gear designed to connect up to your legacy audio system. It has all of the streaming capabilities, plus both a toslink digital and analog audio input. On the output side you get analog RCAs and a coax digital out. You can set up the Formation Audio piece as an audio source or as a preamp for a power amp. One cool part about Audio is it would allow you (with a phono preamp) to add a turntable to your Formation system. Audio will sell for $699.

These new Formation pieces allow you to put together a music system that rivals separate components, but takes up very little space and is super simple to set up.

Formation initially will offer Spotify Connect, Bluetooth aptX HD, and for iOS users, Apple Airplay 2. Another really cool feature is the fact that all of the Formation components are Roon Ready. Roon is a fantastic music interface that is the choice of music lovers with large libraries, plus it includes Tidal, a high-resolution streaming music service. Bowers & Wilkins says by the end of 2019 they will have all the major music services in the Formation ecosystem.

Most wireless music systems have been written off by audiophiles due to their limitations in sound quality. We suspect Formation is going to change the opinion of everyone who hears it!

You’ll be able to experience Formation for yourself at our Raleigh and Charlotte locations, and as we learn and test more of the pieces, we will update this article.