The Audio Advice Story: How it All Started

Leon Shaw felt the rumbling fuzz of Ritchie Blackmore’s guitar from all the way down the hall. We all know the riff – it’s the same one every budding guitarist learns straight away. “Smoke on the Water,” after all, was a hit in 1972. So were “Melissa” and “Snowblind.”

In the early 70s, things were still “60s groovy.” Electric Ladyland was still fresh on everyone’s mind. The Beatles weren’t together anymore, but the former members were releasing solo albums. This was the world Leon inhabited when he arrived at Wake Forest University to begin his freshman year. Rock and roll, vinyl LPs, Jimmy Page, Keith Moon, the Stones.

Classic Rock wasn’t classic yet. It was just Rock.

Anticipating long, focused listening sessions in his dorm room, Leon purchased a new stereo based on a flowery description in a catalog. But when he plugged it in and put on a record, there was a big problem. It didn’t sound nearly as good as the Crosby, Stills, Nash, and Young stuff he heard emanating from his neighbor’s room. Not even close.

According to Leon, the source of all this great sound wasn’t going to win any beauty contests. “The guy’s stereo was older and uglier than mine,” he said. “But it sounded a lot better. That was when I got curious about sound quality. I started reading hi-fi audio mags.” 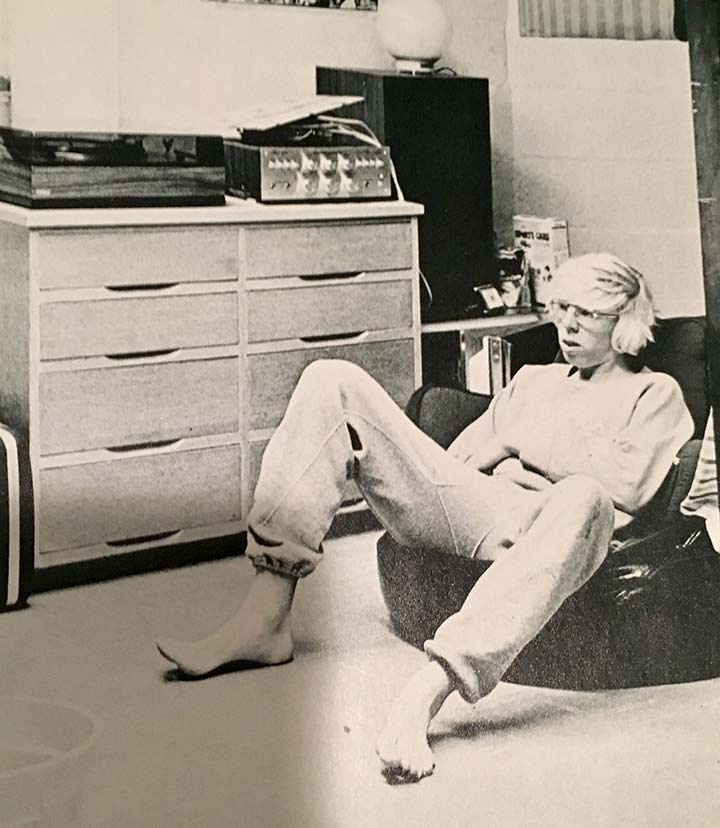 As it turns out, Deja Vu didn’t have to sound lethargic and indistinct. When played through his hall mate’s stereo, it actually sounded the way it was supposed to: warm vocals, bass that was pure and deep, and a sound that made you want to keep listening. For Leon, this was a “eureka” moment.

“It was the spark that started the fire,” he explained. “By the time I graduated with an economics degree, I was definitely somewhere on the audiophile spectrum. I’d already gone through three pairs of speakers and was on a quest for the holy grail.”

What Leon hadn’t become was an eminently employable college graduate. Lacking a GPA that would wow hiring managers at banks and investment firms, he decided to sell stereos for a few months while he figured out how to use his degree.

And since this was 1976, what better place to get started than Sam Goody?

“Mall stores like Sam Goody weren’t nearly as cool as, say, indie record stores are today,” Leon said. “But they sold stereos there, and it was a good way to keep up with the latest equipment. I at least got to be around all this stuff that I was so enamored with.”

One day, in between trying to talk someone out of buying a cheap cassette player and looking forward to the next Chicago album, an unusual sort of customer walked through the door. Instead of asking Leon to explain the differences between one stereo and the next, he practically scoffed at Sam Goody’s selection.

“He asked how I could stand to listen to solid state stuff,” said Leon. “I didn’t quite know what he meant.”

Soon afterward, that same customer brought his all-tube Audio Research system to Leon’s house. He put on one of his favorite test records, Jackson Browne’s Running on Empty, and let the sweet grooves burst forth from the speakers. The piano and the harmonies just sounded real. That was when Leon had his second epiphany.

“It totally blew me away,” he said. “That was when I really started to understand how incredible a recording could sound.”

Getting started: an exercise in testing and comparing

Today, Audio Advice’s world-class showrooms come complete with interactive demonstrations of the most innovative home technology on the market. There are just a handful of places like this left. Of the ones that are still around, few are as old as Audio Advice. And almost none are still run by their original founder and resident audiophile.

Leon has that cool, unassuming manner one only finds in people who have spent their lives doing what they love. Would he be that way today if he had gone to work at the bank instead? Probably not. Luckily for Leon (and the audio world), he never applied for a conventional job. Opting for speaker wire and beanbags over starched duds and stale conference rooms, Leon hung out his shingle in 1978. Audio Advice was born.

Back then, there were around twenty local stereo shops. Compared to the competition, Leon’s store lacked many of the products that he and his partner wished they could sell. “None of the vendors wanted to sell us anything,” he said. “We were really new, and nobody knew how long we’d be in business. This was also Raleigh, not Los Angeles or Chicago.”

To get started, he had to settle for the few vendors willing to sell him their gear. He also had to listen to music with the products to decide what was worth stocking – and what wasn’t.

“That’s how we got started,” Leon explained. “My partner and I would test new things by listening to them. If we didn’t like it, we didn’t sell it.”

Slowly but surely, Leon got products on the shelves and started making sales. About nine months in, the other vendors realized he had a cool store and started selling to him. By late 1979, you could find Audio Research, Vandersteen, and Magnepan equipment on the Audio Advice shelves. Raleigh’s audiophile crowd started to take notice.

“Testing and comparing equipment sort of became our thing,” said Leon. “We just didn’t want to stock the cheap stuff. I still test pretty much everything we sell. It’s just how we are. We reject a lot of products.”

“We loved to try new things.”

Being some of the first people to hear Damn the Torpedoes and Tusk through some of the best audio equipment on the market would have been exciting for nearly any young 20-something in 1979. For guys who were already seasoned audiophiles, it was a dream come true.

“All of us loved sitting around and listening to music,” Leon said. “It’s what we did. We’d tweak things and tinker around. Changing cartridges on turntables, moving speakers. We loved to try new things. I think that at one point I was switching between six different phono cartridges!”

There was just one problem, and it was a big one: the location.

“That first shop was not in an ultra-visible, heavily trafficked area,” Leon said. “It was fine if you were an audiophile and you’d heard about us, but being tucked away wasn’t doing us any favors, business-wise.”

In 1981, Leon moved Audio Advice to the site of a recently defunct competitor. Now that they were in a much busier shopping center, his business wouldn’t have to live and die by the word-of-mouth, “these guys know their stuff, man” clientele. Better visibility aside, the new space also accommodated many of Leon’s mid-80s explorations, like home theater and whole-house music systems. Remember Miami Vice?

“That was the first show to be recorded in stereo,” Leon explained. “It was a big deal at the time. We predicted that home theater and whole-house music systems were going to catch on, so we started selling what was out there.”

What was out there was a product called Audio Access. By today’s standards, it was ridiculously convoluted. You had to take apart the electronics and solder stuff just to make it work properly. But in the 1980s, being able to hear and control your music in more than one room was brand new and super cool!

“People really loved these systems back then,” Leon said. “There was still a lot of stuff we just never picked up, though. Things that became big flops. Like Frox. There’s a reason why you don’t remember that one.”

Embracing change while sticking with what you know

By 1991, Audio Advice was all in with home theater, in large part because people were able to enjoy more of their favorite shows and movies in Dolby surround sound. This was the heyday of big screen TVs that took up whole sections of your living room. Audio Advice had the best ones. Leon saw it as a complement to his two-channel audio business.

“It was one of the changes we really embraced,” Leon said. “And we were right about that one. Home theater is still a ton of fun, even decades later! ”

One change Audio Advice didn’t embrace was the transition many retailers made from having home audio showrooms to being straight-up plasma TV stores. By the early 2000s, many of Raleigh’s remaining stereo shops had gone that route. Today, there really aren’t any other local stores that do what Audio Advice does.

“We stuck with what we know and love,” Leon said.

In 2009, Leon opened a new location in Charlotte. Audio Advice now covers nearly all of the Carolinas, making it one of the largest high performance audio equipment retailers on the East Coast. That expansion, combined with a growing online business, is helping Audio Advice reach more people in more places.

"One of our goals right now is to connect with a new generation of audio enthusiasts, and that includes experienced and aspiring enthusiasts," said Leon. "The resurgence of vinyl is a big part of that, actually. We're finding that younger listeners really appreciate  quality and authenticity in recorded music. They remind me of myself 40 years ago"

In many ways, the vinyl revival has brought things full circle for Audio Advice. Leon gets to research and test all the latest turntables – something he never thought he'd be doing after most people quit buying them in the 1980s. He can show customers how “Almost Cut My Hair” sounds when played through some of the best turntables on the planet. He helps people feel that same epiphany he felt when he first experienced great sound some 40 years ago, often with the same class of equipment and even the same music.

There’s a timelessness to what he does, and it's infectious.

“We definitely cater to a wider audience than we used to,” Leon said. "But we've never strayed far from our roots. We’re still the same company we were in 1978. Great sound still matters.”