The Best Entry-Level Turntables
(and what NOT to buy)

Getting a new turntable is a big deal. And if you’re buying your first turntable or transitioning from basic equipment to your first “true” vinyl setup, it might be one of the most exciting purchases you ever make. We hope you find our guide to the best entry-level turntables helpful. If you're looking for more turntable articles, our blog is a great resource.

But if you’re still new to the world of vinyl, choosing a turntable might seem a little overwhelming. While you definitely want great-sounding gear, you might not feel ready to buy the snazziest, most expensive turntable available. Luckily for you, there are a wealth of entry-level turntables that offer excellent sound quality and can help you enjoy vinyl to its fullest.

We’re about to consider three great turntables for aspiring vinyl lovers. First, let's take a look at what you shouldn't buy and examine the factors that matter most when selecting an entry-level turntable.

Shopping malls are chock full of low-priced turntables these days. Trouble is, you’ll probably get what you pay for.

Low-priced though they may be, many mass-produced turntables are made from flimsy, low-quality materials. That includes the tonearms, which, unbelievably, are often made from injection-molded plastic! These turntables are capable of producing sound from a record, but that’s pretty much it.

Most cheap turntables also don’t spin at a very consistent speed. So instead of feeling like you’re at the concert – one of many reasons people love vinyl – you hear warble in your favorite songs. You just won't get the signature vinyl tone you’re after.

Worse yet, these turntables are not going to take care of your records. For starters, they usually include a cheap stylus with a large tip. Many also track too heavily. Combine the large, cheap stylus tip with excessive tracking force, and you are guaranteed to damage your precious records.

If you want your vinyl to last, it simply doesn't make sense to get a table like this.

The same downsides apply to all-in-one record players. Cheap tonearms and cartridges, excessive tracking force… the all-in-ones have these problems as well. Worse yet, they also come with speakers built-in. Not only will these sub-par speakers sound awful, but they will also make your turntable vibrate, which introduces unwanted resonance that diminishes sound quality. They might also make your records skip. In most cases, you don't even want your turntable and speakers on the same piece of furniture, much less in the same box. 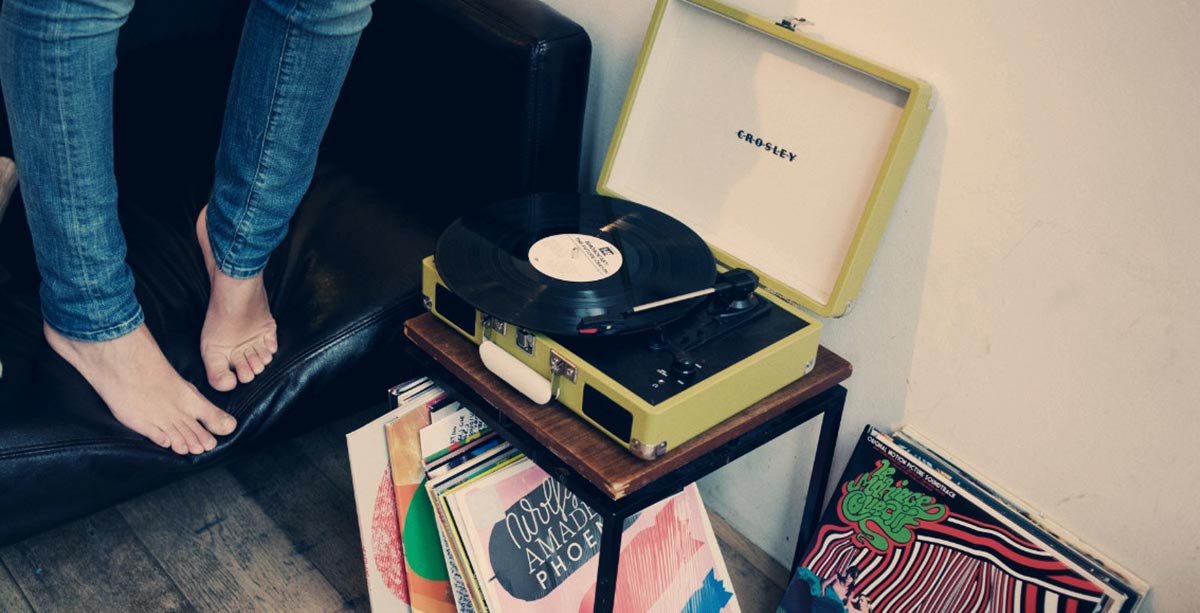 If it looks like a suitcase, you should probably avoid it.

Unfortunately, there is an epidemic of all-in-one turntables, lead by the huge popularity of the Crosley Cruiser. While they look cool and might make a nice piece of retro decor, we wouldn't recommend actually playing your vinyl on one. They're more of a novelty item than a piece of audio equipment.

The bottom line for low-priced turntables? When you opt for a sub-$100 model or settle for an all-in-one system, you’re not getting a quality piece of gear. Rather, you’re sacrificing sound quality for the sake of convenience and price. You’re probably destroying your vinyl, too. Considering the fact that new vinyl records are going for $30+ these days, it just doesn't make sense to play them on a $50 turntable.

What should you look for in an entry-level turntable?

For that warm, rich vinyl sound, you want a turntable made from quality materials. Thankfully, many entry-level turntables at modest price points can give you that. You just have to know what to look for.

The platter should spin at a constant speed so it never sounds like your music is warbling. A heavier platter offers greater speed consistency.

The tonearm should fully support your phono cartridge so that it picks up all the music stored in the record grooves. The bearings shouldn’t rattle and should be friction-free. A good tonearm will be made from materials that don’t resonate.

A great phono cartridge extracts more information from the record grooves. If it’s set up properly, you get the added bonus of reduced record wear. All of the turntables we’re about to consider include cartridges that were engineered by audio experts and perfectly match the tonearm of the turntable.

Now that we know what to look for in an entry-level turntable (and what to avoid), let’s consider some great options for entry-level vinyl enthusiasts. All three of these turntables offer excellent design and are equipped with quality components. You’ll achieve the rich vinyl listening experience you crave, without denting your wallet.

Pro-Ject took their best-selling turntable ever, the Debut Carbon DC, and added many upgrades that vastly improve the sound.

Who knew you could get such a high-end cartridge, which is usually $150 on its own, at this price? Or, for that matter, a carbon-fiber tonearm? The tonearm, incidentally, is how the original Debut Carbon got its name. It’s also a primary reason it became one of the best-selling turntables in the world.

In addition to its high-end cartridge and tonearm, the EVO offers ThermoPlastic Elastomers (TPE) for damping. This is the same as their X1 turntables, which sell at a much higher price-point. You get Thermoplastic Elastomer damped feet, a new motor using the same damping, and an upgraded platter that uses TPE. This high-tech isolation material results in smoother rotation & minimal resonance.

Critical specs for the Pro-Ject Debut Carbon EVO include:

If the Audio-Technica LP120X looks familiar to you, it's probably because it looks a lot like the most famous DJ turntable on the planet, the Technics SL-1200. The LP120X is a favorite in this price range and it's one of the most popular turntables sold today. While we typically prefer belt-drive turntables for music listening, the LP120X is a decent table — especially at this modest price-point. If you are choosing between an all-in-one player or the LP120X, we'd go LP120 every time.

Key specifications for the Audio-Technica LP120X-USB: 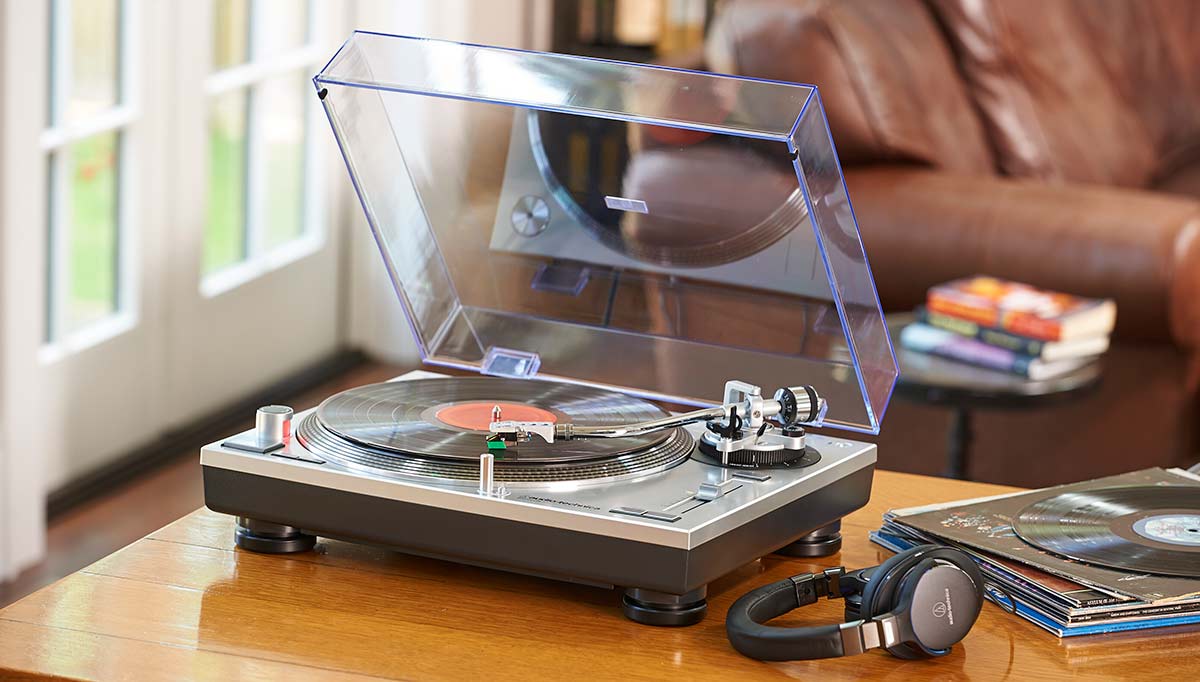 Over the last few years, U-Turn Audio and their turntable, the Orbit, have taken the audio world by storm. With the Orbit, U-Turn has created a well-made beginner turntable with everything you need and nothing you don't. The Orbit starts at $179 for the basic model, but we highly recommend you upgrade to the Orbit Plus or Orbit Special which include an acrylic platter. 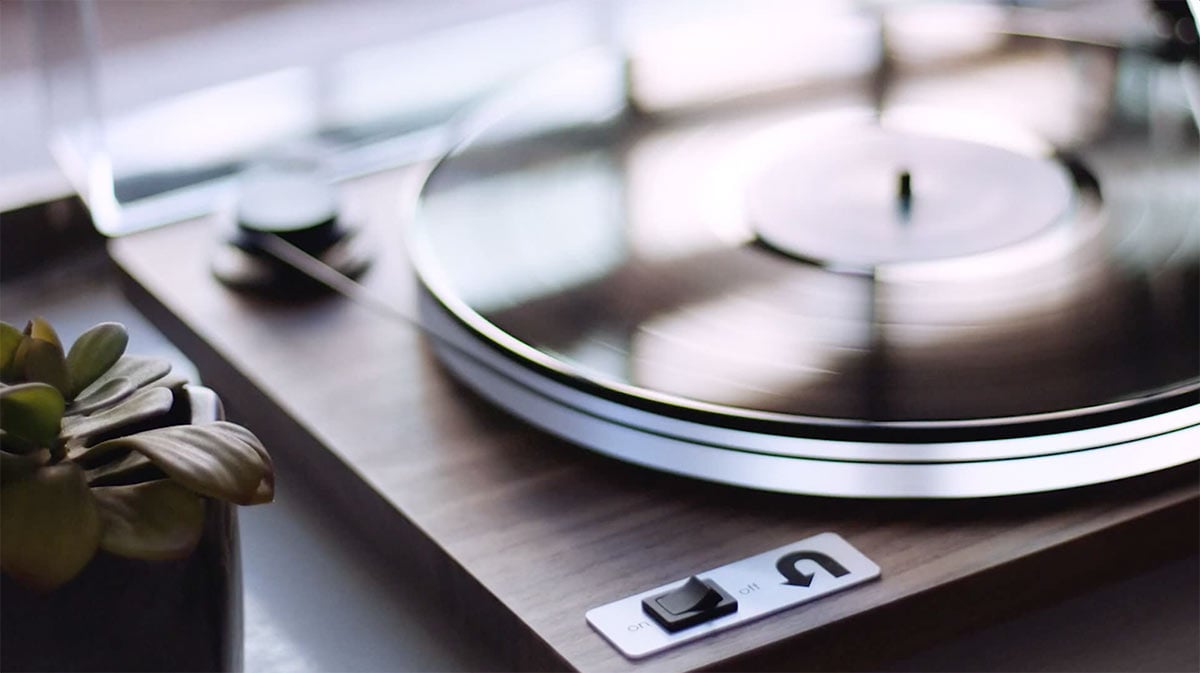 If you’re buying your first turntable, the Rega Planar 1 is one of the simplest, most user-friendly options on the market. Just slide the balance weight onto the tonearm, remove the stylus guard, and you’re ready to spin!

Besides being easy to set up, the Rega Planar 1 comes with a Rega Carbon MM cartridge and a hand-assembled RB110 tonearm – nice features for an entry-level model! The Thermoset plinth is gloss laminated and comes in black or white.

You won’t have to worry about unwanted interference with this turntable. It’s Rega’s first entry-level model to feature a 24v, synchronous AC motor with a “low noise” aluminum pulley. At this price point, it’s difficult to find a turntable with high-quality components like these.

Here’s a rundown of key specs for the Rega Planar 1:

Who said a great turntable had to be expensive?

With the vinyl revival in full swing, audio equipment makers are producing quality turntables at every price point. If you’re new to vinyl, this is great news! It means you don’t have to drop an entire paycheck on a turntable to enjoy great sound.

It also leaves you with cash to invest in other components, like a great phono stage, a better amplifier, and quality speakers.

With a high-quality turntable on your shelf, you can finally experience those warm, rich vinyl tones. After all, there’s nothing quite like the sound of a great record spinning on a great turntable. It’s a listening experience that’s second to none.

And if you haven’t experienced it yet, just you wait.

Need help choosing the perfect turntable? Chat with us and we'd be happy to help!

If you have any other questions or need help deciding, please send us a message or chat with us.