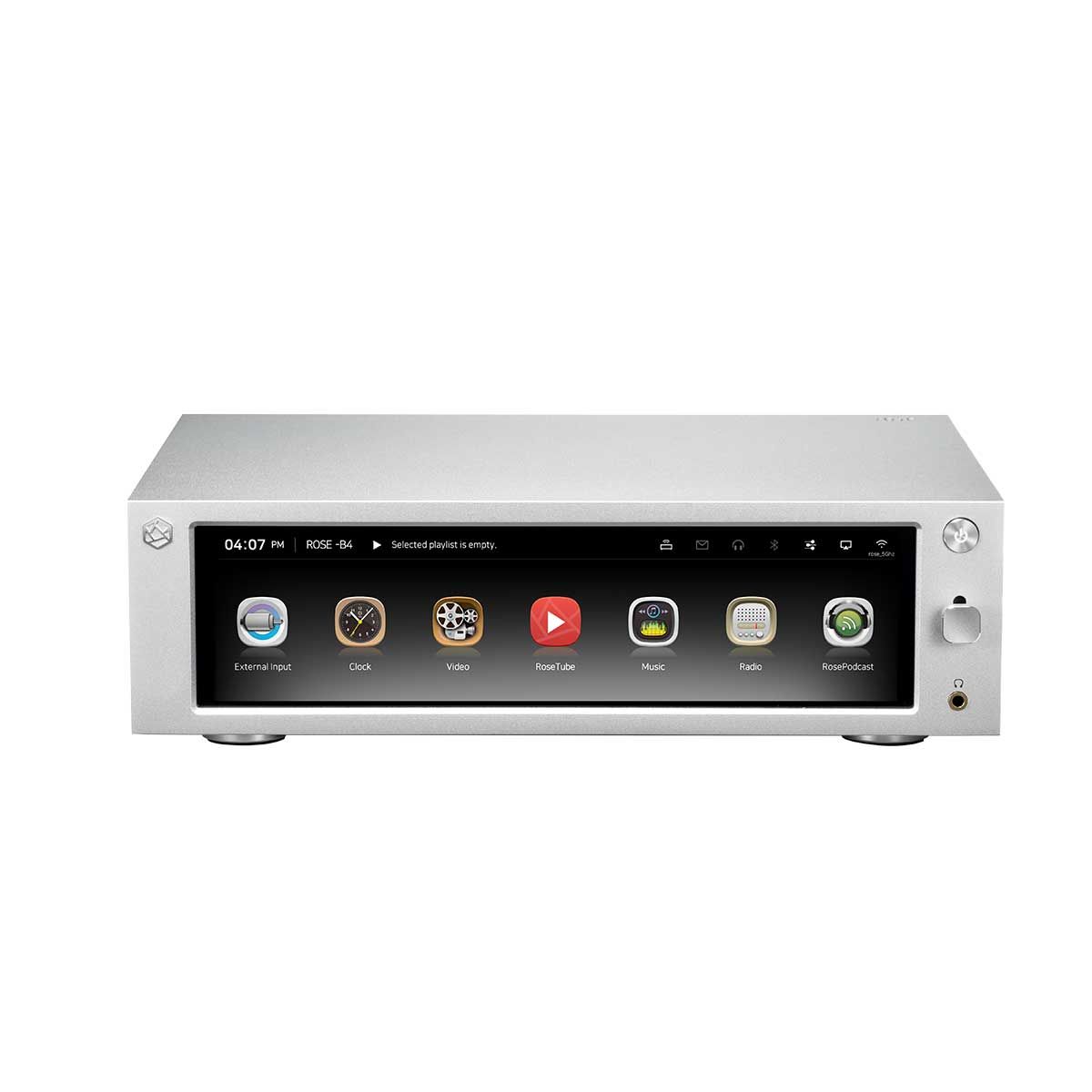 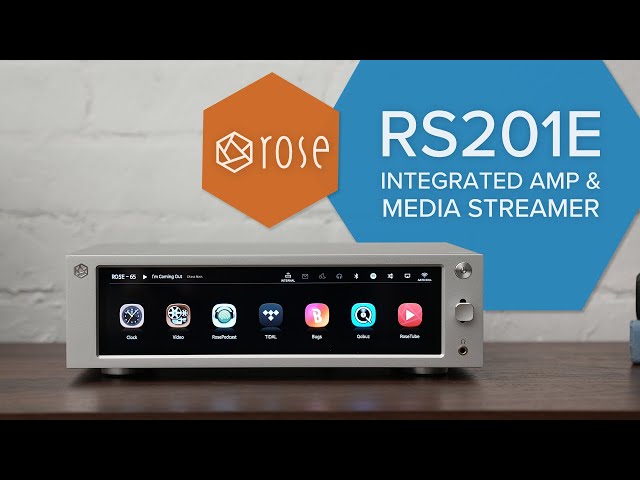 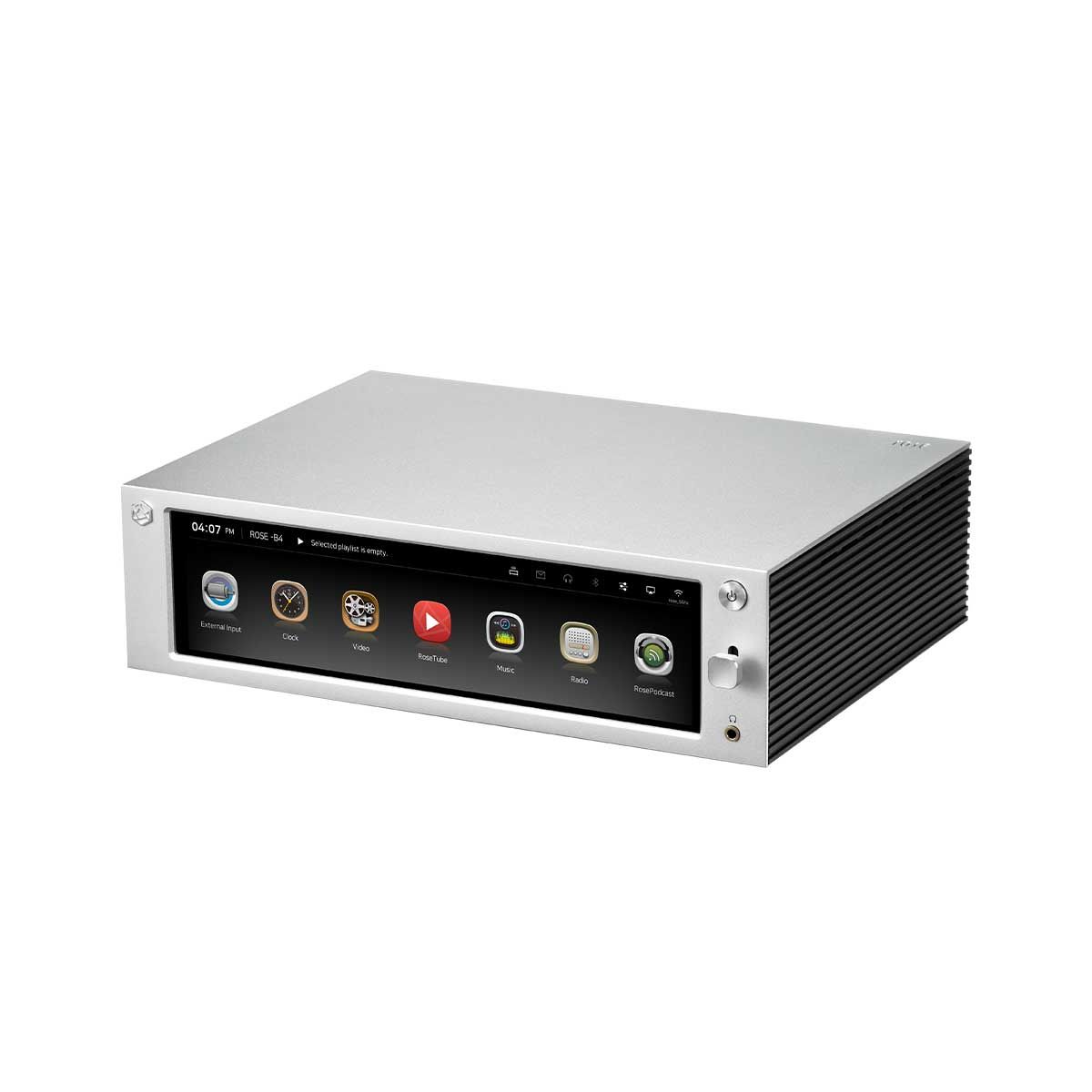 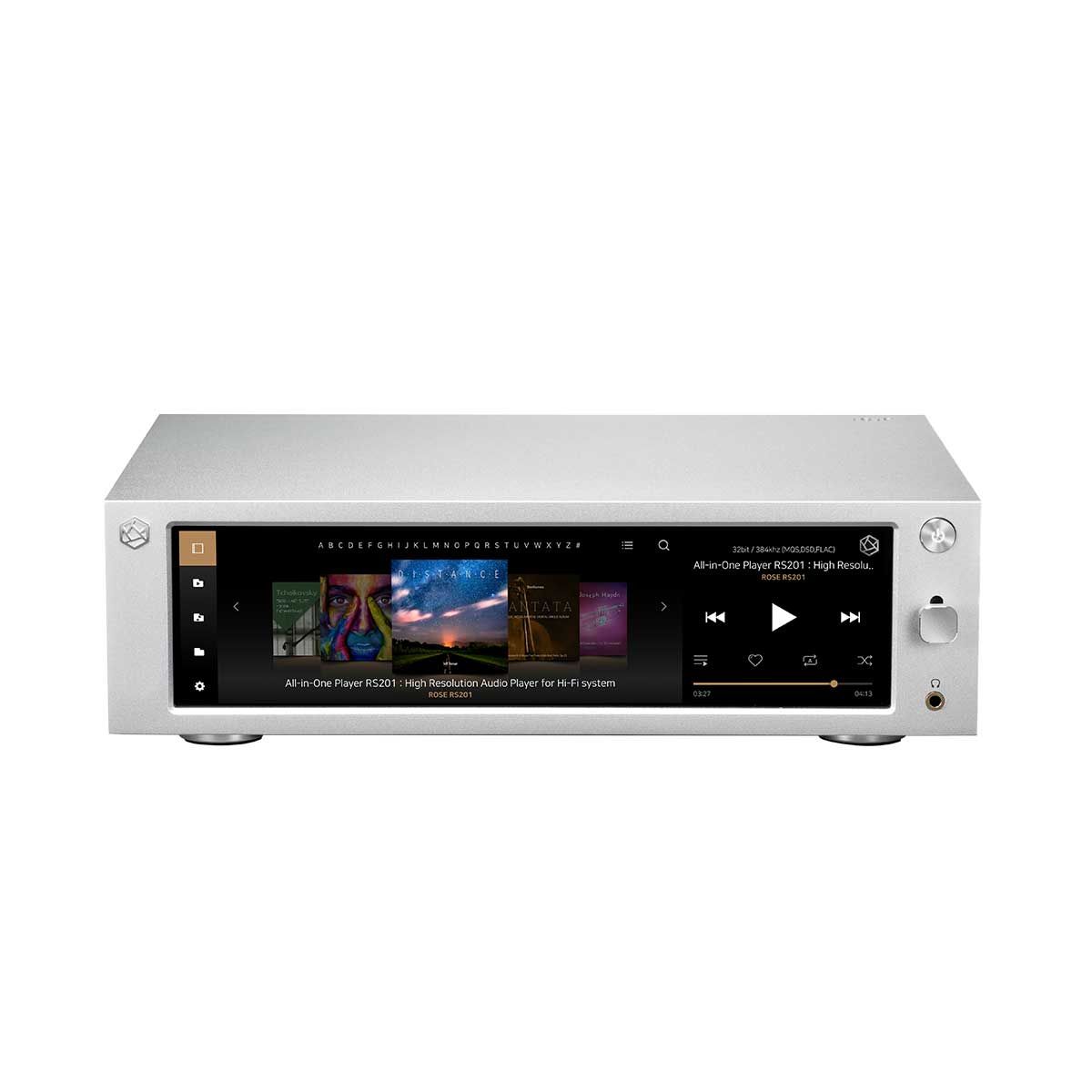 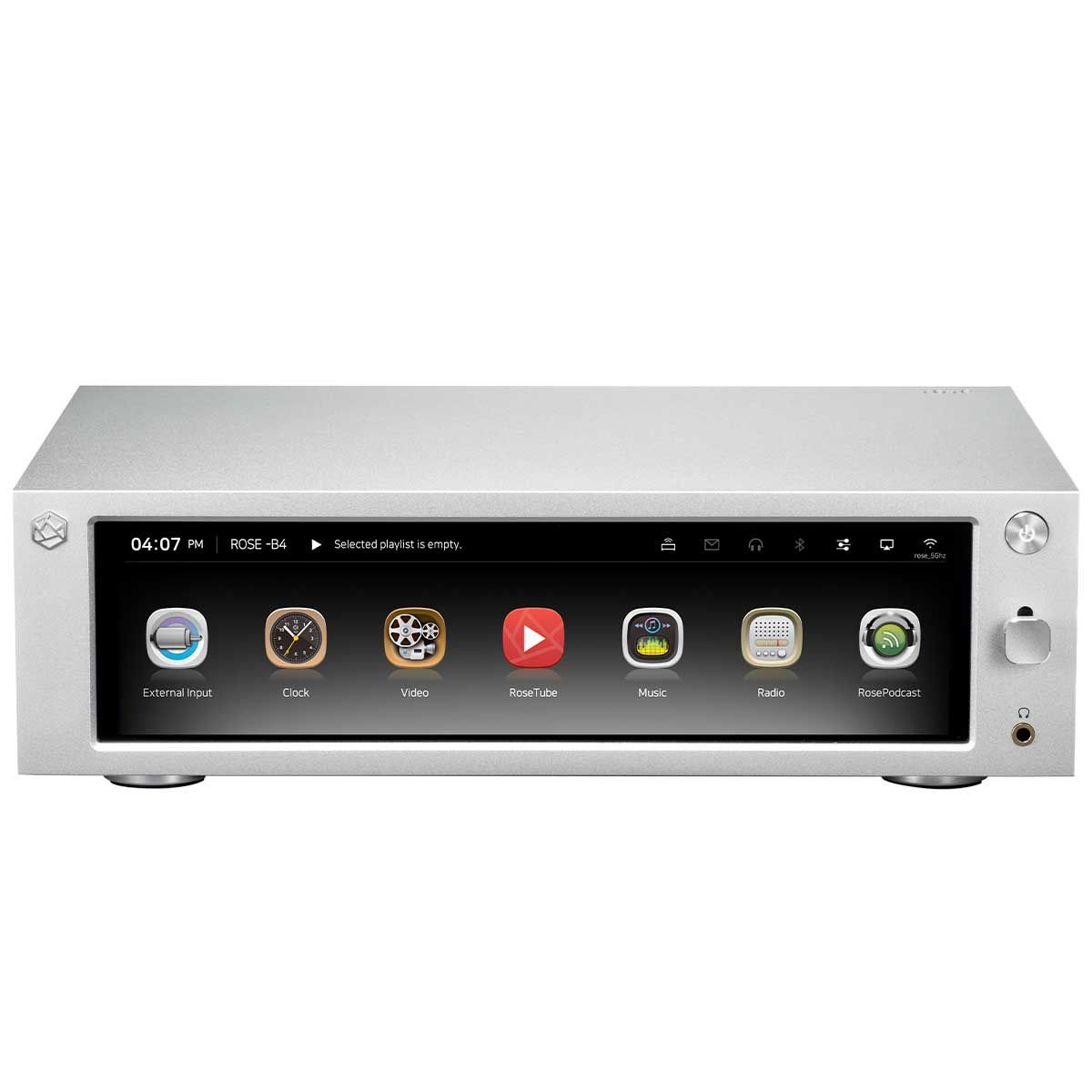 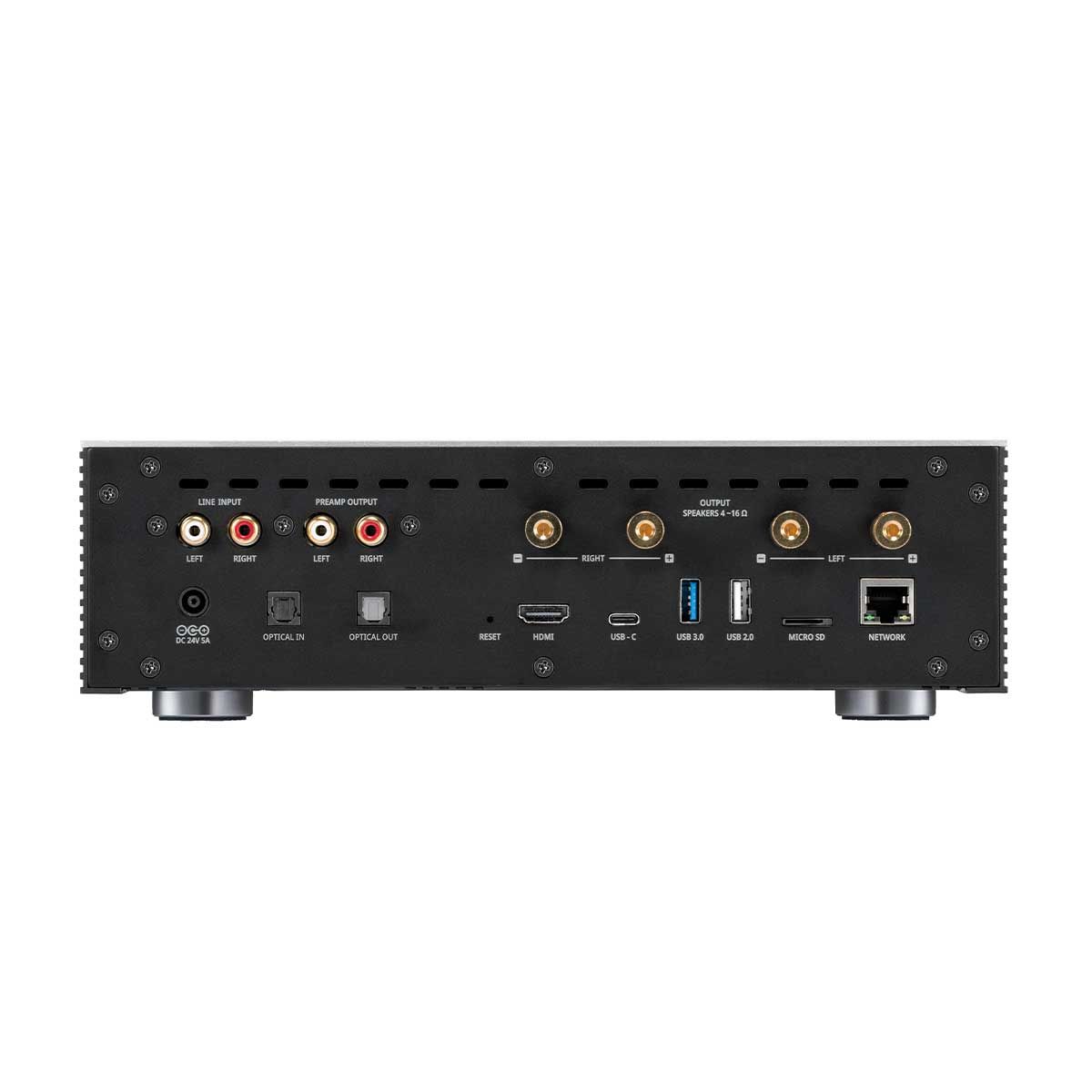 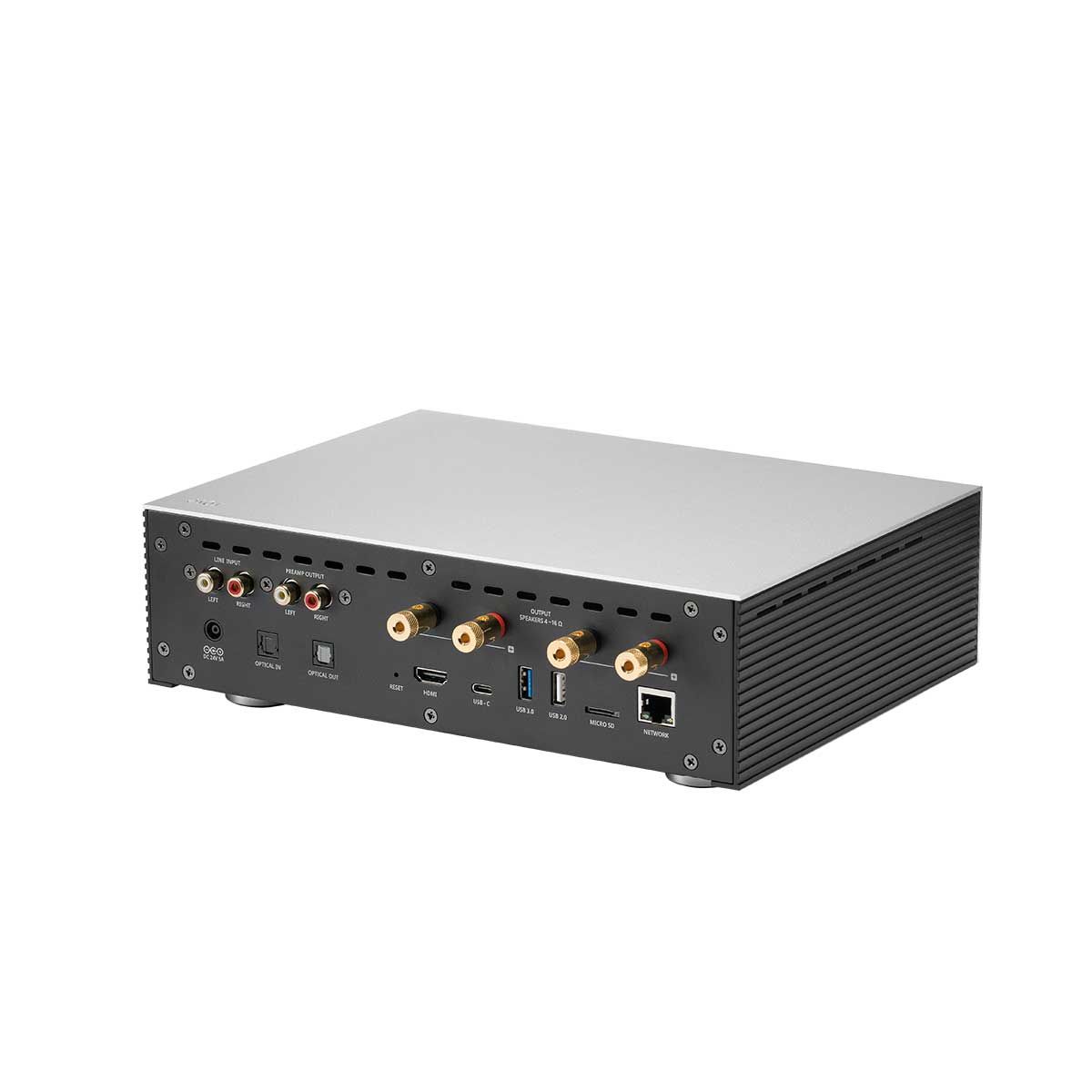 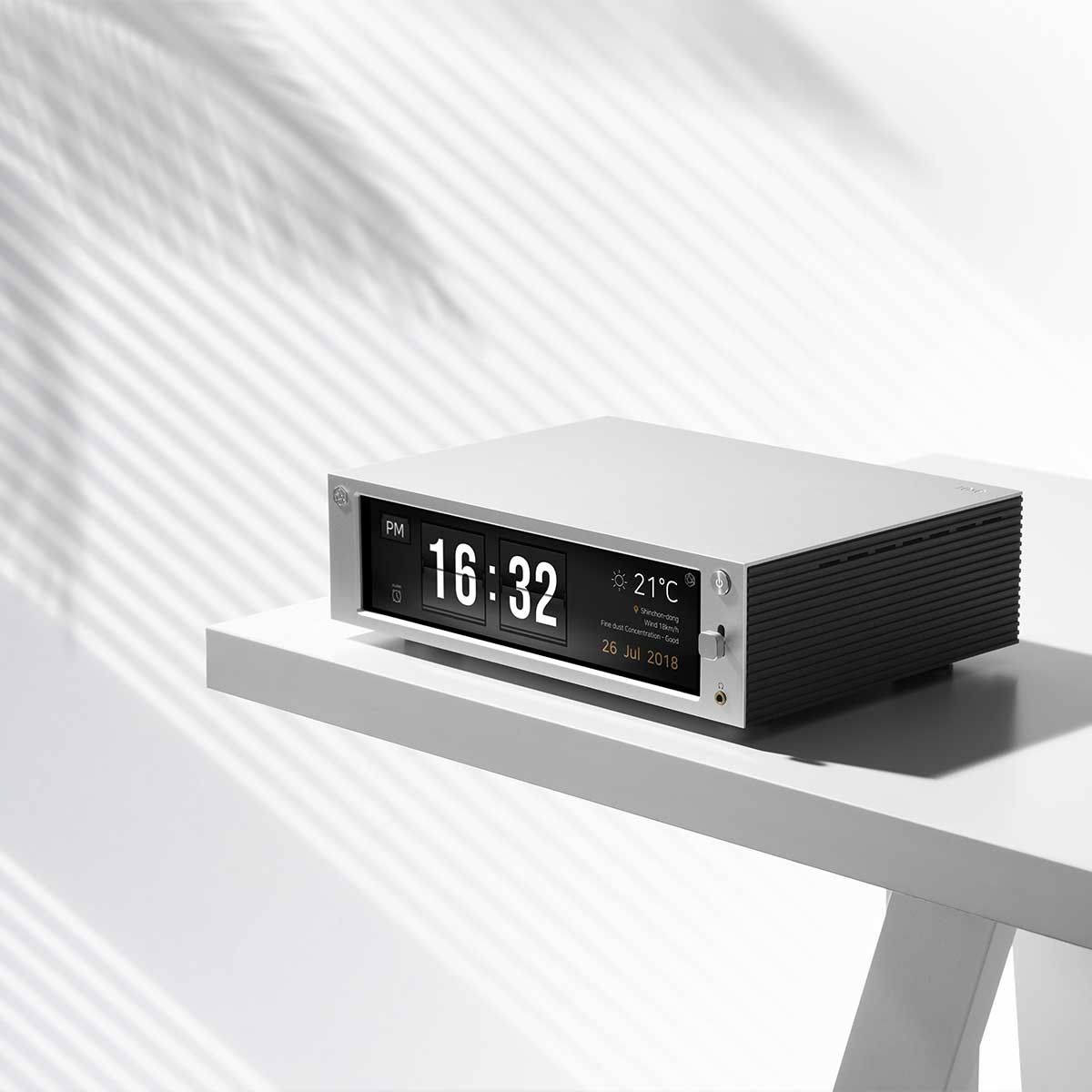 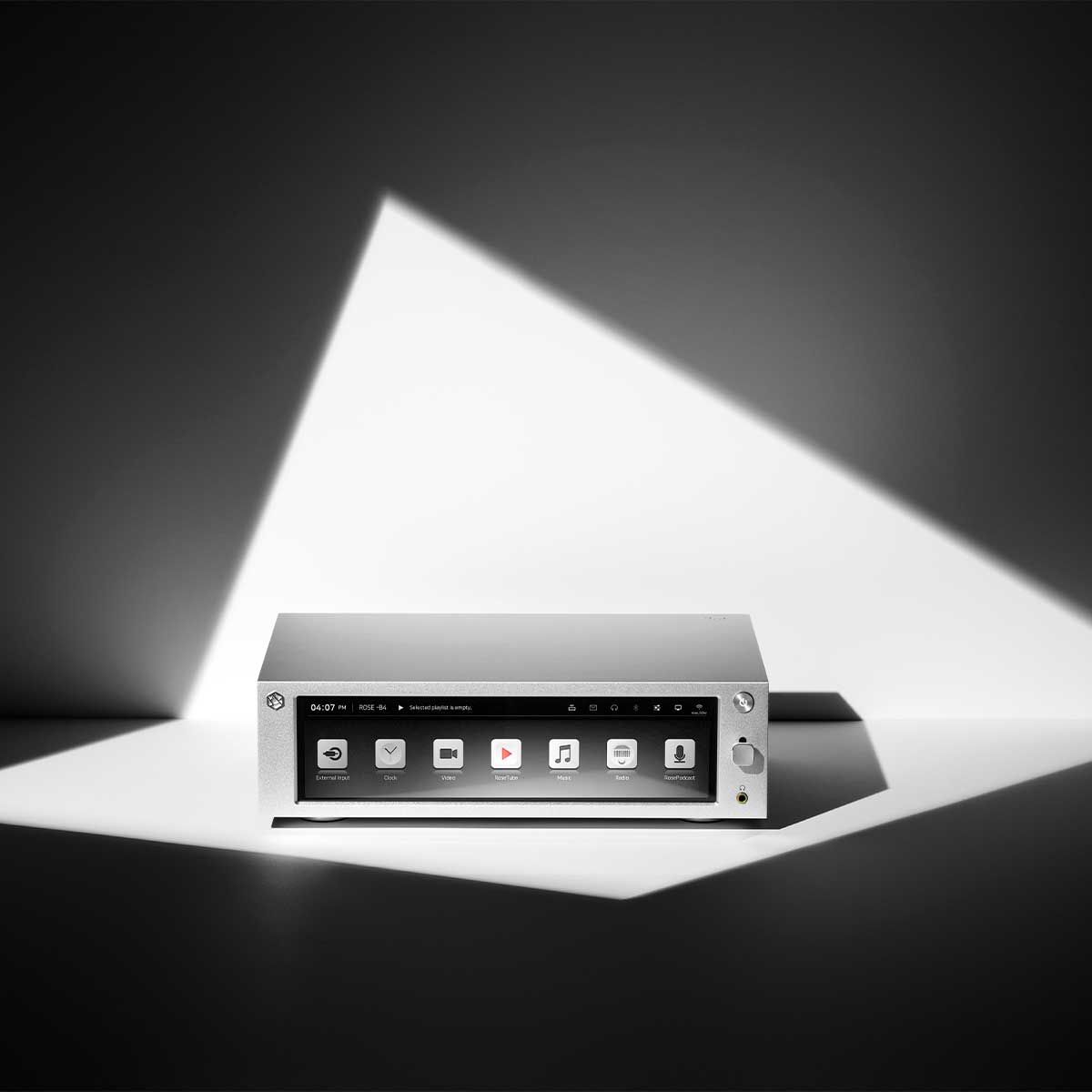 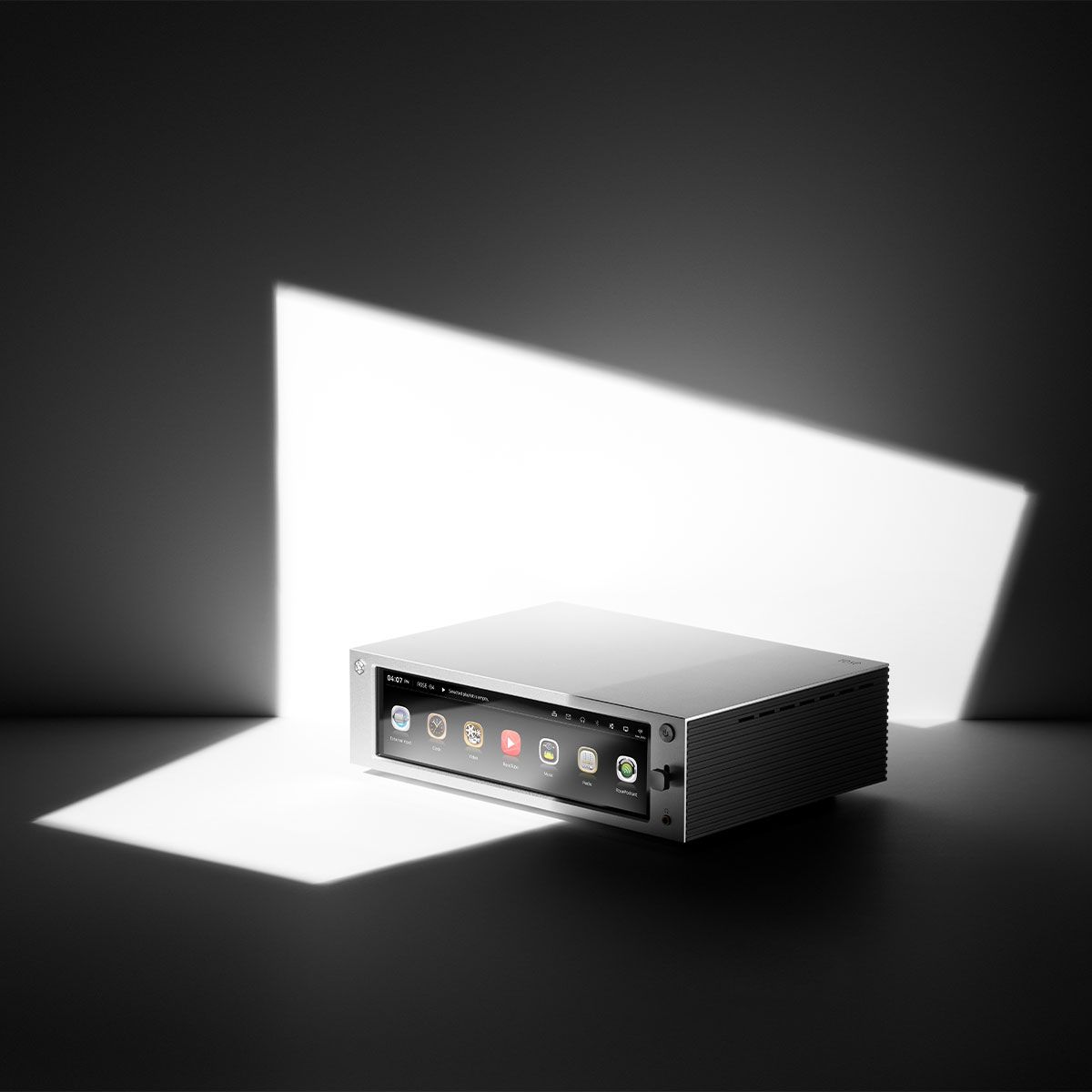 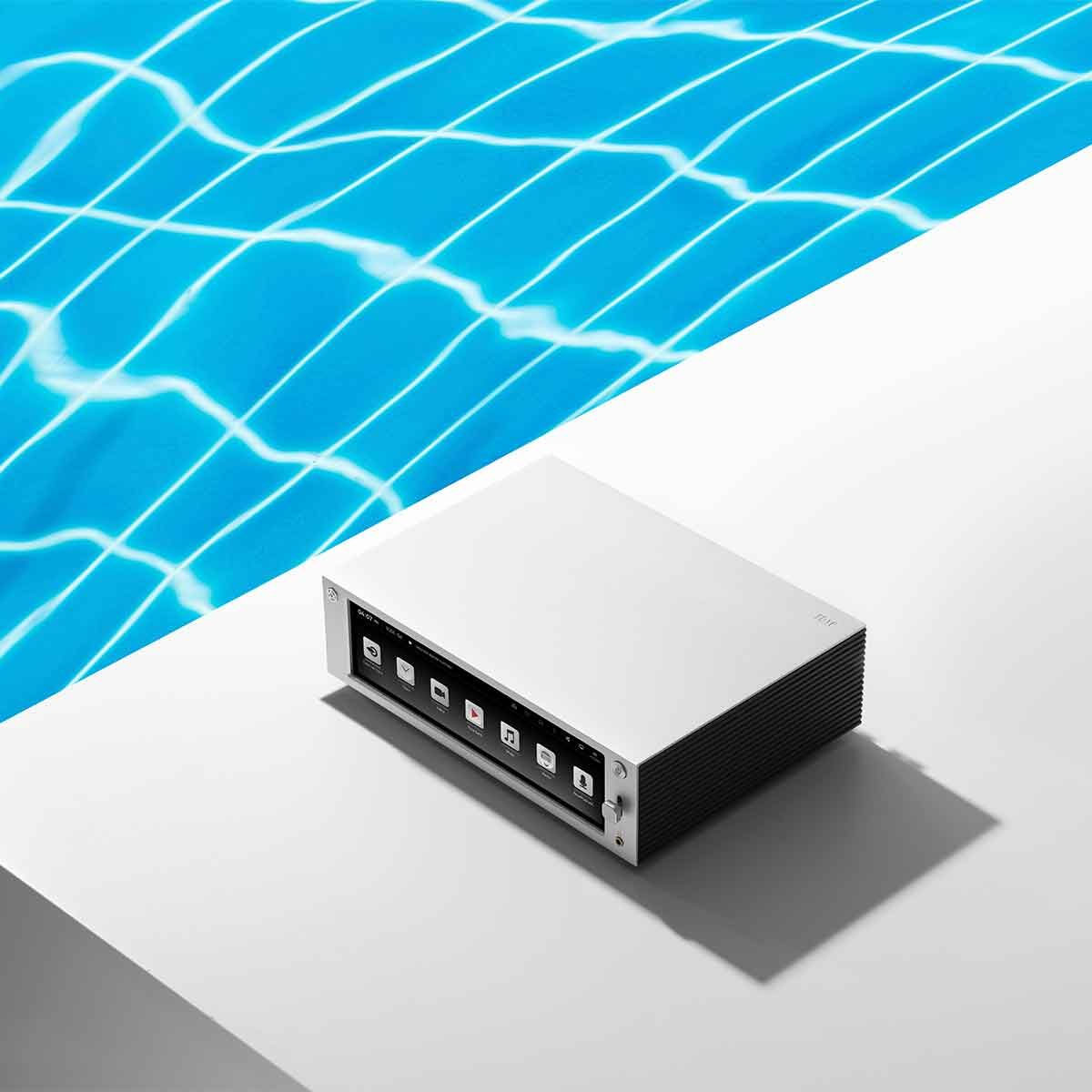 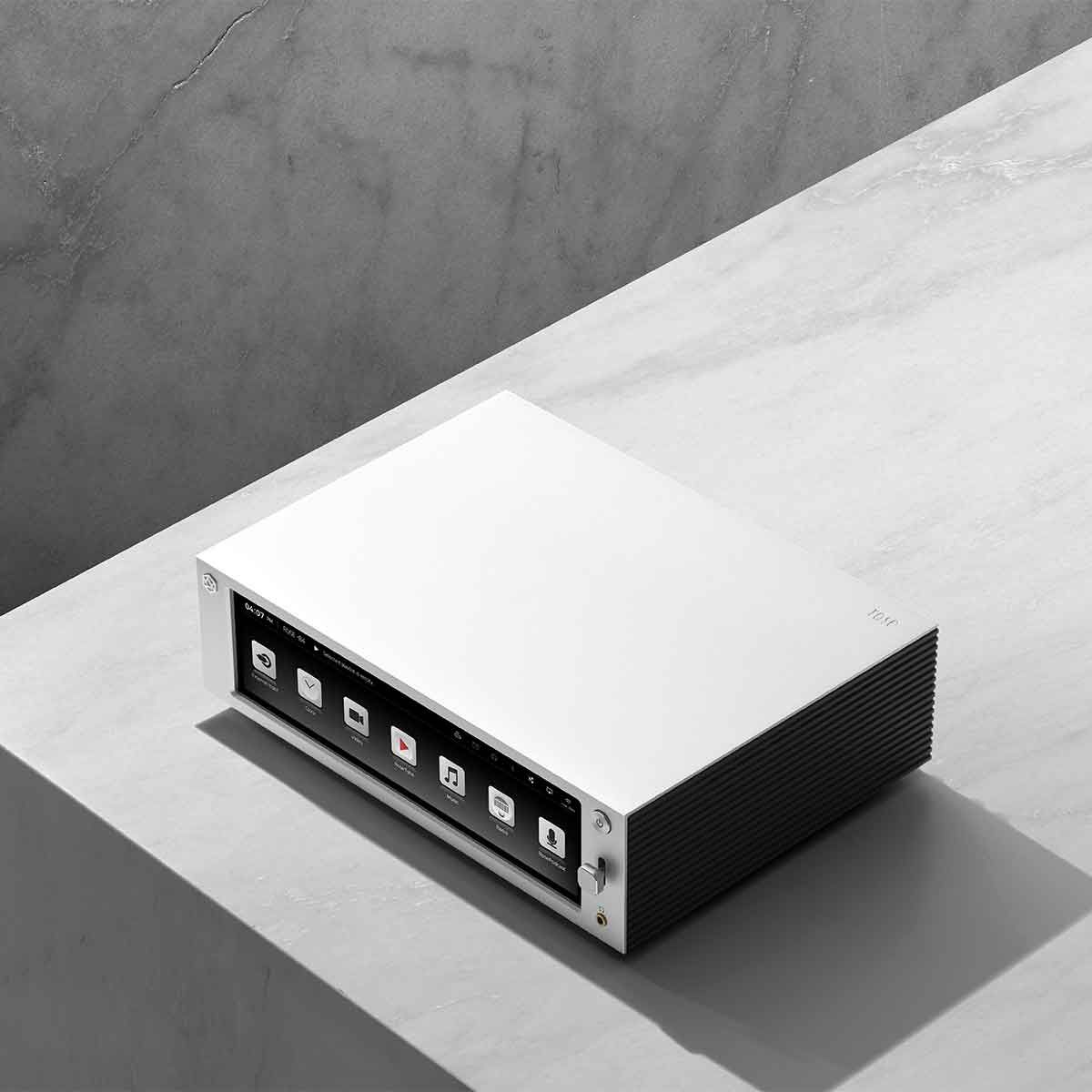 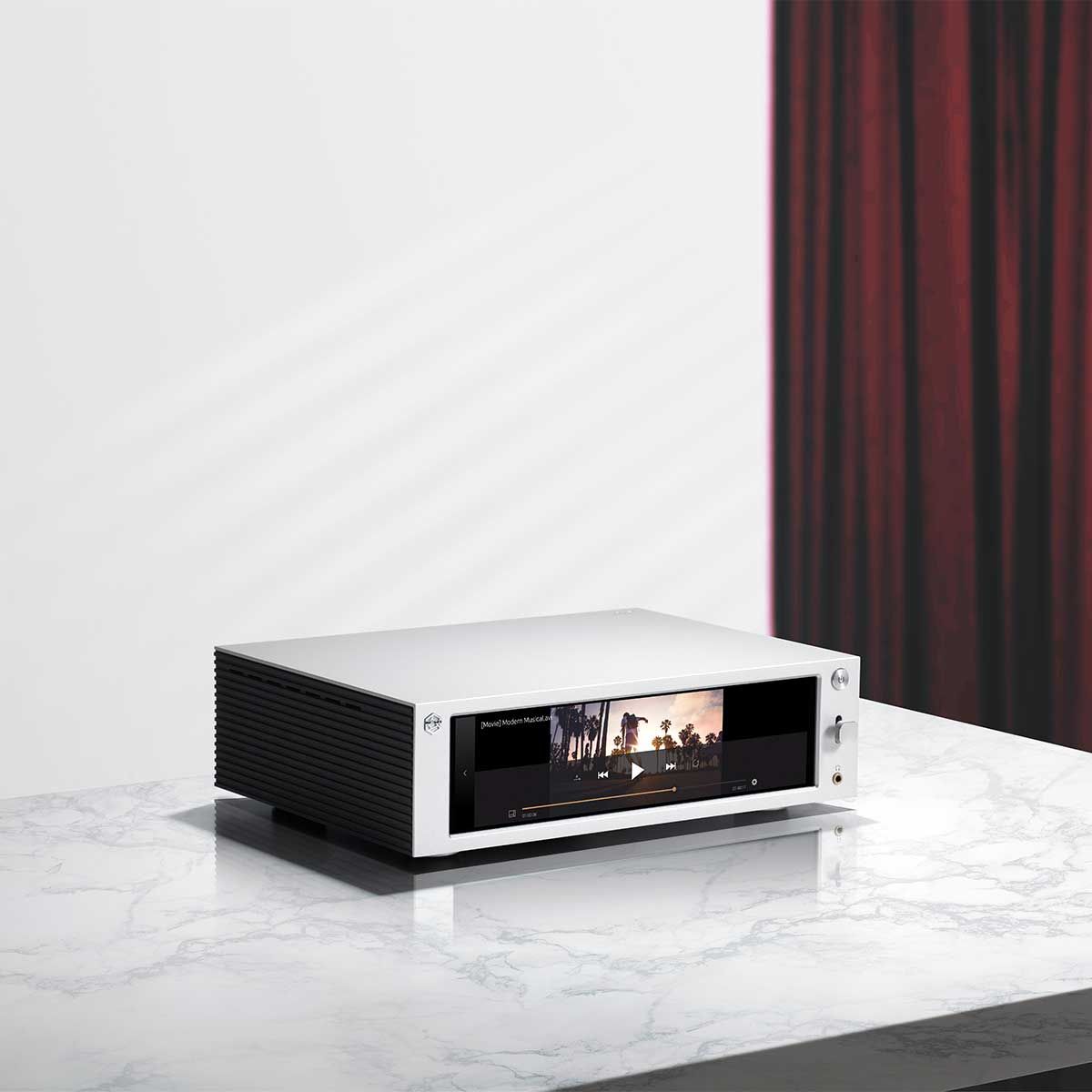 Watch our Review Watch our Comparison

HiFi Rose has a pretty cool backstory. Its parent company—Citech—was founded in 1954 when they first started making set-top boxes for television sets in Korea.

Eventually, they started specializing in touch interface software for consumer-facing internet kiosks—and this easy-to-use tech found its way into all the network media players & integrated amplifiers they make.

Interestingly, one of the executives at Citech was an audiophile, so he created a division within the company dedicated to audio.

In 2017, the idea that started from a passion for premium components, ideal circuitry, and beautiful hardware with the best user experience available became a reality, and HiFi Rose was born.

In our HiFi Rose overview, we covered the design philosophy behind this new brand and the user experience, but for this review, we will tell you more about the RS201E hardware and explain the features.

The RS201E is the entry-point model in the HiFi Rose lineup that starts out with a generous 8.8-inch touch capacitive display that will show high-definition album cover info and video playback at 60 FPS. This is both a network media player and an integrated two-channel amplifier for connecting up a pair of passive speakers (50W x 2 into 4Ω)—all rolled into one single, versatile component.

The front-top plate features high-quality anodized aluminum, a volume knob with a “joy stick”-style control, a power button, and a very wide-view touch screen for a nice, modern look and feel. The body of the unit spans almost 11-inches wide, 8-inches across, and stands 3-inches tall.

The RS201E weighs about 5 lbs and is available in a silver finish, only.

On the back of the unit, there are two pairs of speaker terminals which support 4 ohm passive speakers. The RS201E’s amplifier section has a maximum output of 50 watts per channel (100W), which is enough power to enhance your TV watching or two-channel music. 100 watts will also drive most passive speakers with reasonable impedances & sensitivities (4~16 Ω).

The RS201E can also be used as a pure DAC/streamer with a fixed-level analog output so you can connect it with a separate integrated amp, preamp, or a powered soundbar. Should you need more power, a pair of unbalanced stereo RCA sockets labeled “PreAmp Output” will let you use the RS201E as just a music streamer with a separate vacuum tube amp, or a reference-grade amplifier, such as the HiFi Rose RA180 integrated amp.

If you already have an external DAC, you can bypass it using the USB 2.0 audio output. If you have a collection of hi-res music & 4K videos stored on an external hard drive, the USB 3.0 type-A DAC input or the SD card reader will let you experience all of it right from the 8.8-inch front panel display! You can even install an internal SSD in an under-chassis bay.

Connecting the audio coming from external A/V sources, such as a CD player, DVD player, or Blu-ray Player to your TV is done through the RS201E’s optical Toslink input or the other pair of unbalanced stereo RCA sockets labeled “Line Input.” Finally, there’s an optical output for connecting the RS201E to a soundbar, and one HDMI 2.0 port that will let you send audio and 4K video coming from the RS201E to a TV or a projector.

As an integrated amp, streamer, DAC, preamp, and Roon Endpoint, the RS201E is designed to enhance TV watching & two-channel music listening. There’s also a headphone jack on the front panel that will accept a 3.5mm stereo miniplug connection! With plenty of expansion options, this model is suited for a media room, a bonus room, or even a living room as an all-in-one streaming multimedia unit.

We tested the RS201E in a medium-sized living room with a pair of Sonus Faber Lumina II bookshelf passive speakers—which need about 50-75 watts per channel to really get them going in an average-sized room—so the RS201E provided plenty of power.

When we powered on the RS201E for the first time, we were greeted with a horizontal stream of familiar icons on the display—Music, Video, Qobuz, Tidal, Clock, Settings, In-Out Setting—plus some others that are less obvious, such as—Bugs, RoseFM, RosePodcast, RoseRadio, RoseStore, RoseTube, CD Play, & CD Ripping.

Tapping the Settings icon allows you to make adjustments to the display brightness, the format of the clock display, the appearance of VU meters that can appear when music is playing, and rearrange the order of apps. You also have the ability to add or remove apps from the main menu, so you can keep the ones you use and sort them just like an iPad/tablet. There’s also a built-in Rose App Store where you can update the apps to the latest versions.

There’s a really cool custom app called “RoseTube” that will let you swipe through a curated list of YouTube videos with the highest resolution and audio stream available plus all the advertising removed. There are a ton of classical performances in this app, and we really enjoyed the selections. You can also search and watch any video that is available on YouTube with this feature. HiFi Rose DAC/Streamers are high-end two-channel audio devices that happen to have 4K video capability, so fans of Tidal’s exclusive video content will probably love this feature!

There’s also an “In-Out Setting” icon that will let you choose things like setting digital or analog external inputs to “Internal,” setting up where they default, and then choosing a digital or analog output. Super cool!

One thing, we have to mention is how easy HiFi Rose’s companion app made it for multiple people to sign into their music streaming accounts like Tidal or Qobuz. In the HiFi Rose Connect app, all we had to do was sign into our Qobuz accounts on our phones even while someone else was already signed into theirs, and already controlling the unit.

This made it so easy for guests to stream their own music to the system when they came over. No one had to sign in and out of anything. They just download the Rose Connect app to their phone, open it, and connect their phone to the same WIFI network as the streamer, follow the on-screen prompts in the app, and away they go. From there they could sign right into their streaming service, and then tap on the RS201E they want to control when prompted in the app. It was that easy!

We streamed all kinds of music, including funk, rock, classical, EDM and Jazz—and everything sounded great. I would say the RS201E’s sound profile was “transparent.” The RS201E presented sound that was clear, resolute, and transparent—which made everything—from the audio coming from 4K YouTube videos—to hi-res versions of Top-40 music—sound really good.

We kept coming back to a hi-res version of Thom York’s title track “The Eraser,” off the 2006 debut solo album. On a really good pair of speakers like the Lumina II passives, Thom York’s vocal almost “floated” outside the speakers right in front of us. The detail was also very impressive. We could pick out more voices in background vocals than without the DAC/streamer.

We would say if you are looking for more audiophile-level resolution, then you should consider stepping up to either the RS250 or the RS150B. But, if you want a sleek, easy-to-use network streamer with an integrated amp, we highly recommend that you check out the RS201E. The Bass was tight, punchy, resolute, and it also had a very clear mid-range with an impressive depth of detail in the stereo image.

With it being Roon Ready, plus support for bluetooth, Airplay2, Spotify Connect, and television connectivity on board, this really has everything needed to be an all-in-one box for streaming hi-res music & 4K video playback.

As the entry-point model in the HiFi Rose line, the RS201E delivers a lot of value with plenty of options to expand it.

This is the model to get for anyone wanting a network media player and an integrated two-channel amplifier—all rolled into one easy-to-use component that also looks super cool with an 8.8-inch front panel touch display!

For anyone with a collection of hi-res music & 4K video files stored on an external hard drive or an SD card, this one delivers a very convenient solution to experience it all without breaking the bank. We like that you can pair this one with the HiFi Rose RSA780 CD drive and rip a CD collection right to the unit!

The upper-end models will deliver even better performance for those who care about having the best musical sound quality possible—but as a multimedia all-in-one for rooms where space is limited—HiFi Rose RS201E packs in most of the key features all of the models share with good sound & video and this one offers one the best user interface we have ever seen from a DAC/streamer at this price-point.

Hifi Rose applies what they call a "Harmonized Design" throughout their most premium audiophile-grade products. RS201E features an upper-class aluminum frame with a volume knob, power button, and a very generous 8.8-inch wide-view touch screen.

Inside, there is a built-in reference-class 32bit High-Performance ESS (ES9018 K2M) DAC that provides a maximum resolution of up to 384kHz. Pair this amp with a pair of your favorite speakers for clean sound with all of your streaming sources plus easy touchscreen control.

The built-in amp section can also be harmonized using the PreAmp Out connection to a vacuum tube amplifier, or reference amplifier to present professional studio mastering sound quality with an authoritative, smooth sound.

On the back panel, there are ample digital connections, including USB, Micro SD, SSD, PC, and NAS support with the latest audio & video formats for MPEG, H.264, H.265, and VP9.

This intuitive and dedicated application allows users to play all music and videos from local and network sources.

You can easily control the device with a dedicated Bluetooth remote controller.

MUSIC & VIDEO: Play music and video files on a local storage device (USB / SSD / Micro SD) and NAS / network shared drives. You can play music categorized by recent albums, albums, artists, genres, composers, and songs. If you connect ROSE and your TV with an HDMI cable, RS201E will let you watch your movies on the big screen.

INTERNET RADIO & PODCASTS: Listen to more than 800 Internet radio stations from around the world. Just register and listen to your favorite radio channels. ROSE server offers channels organized by topic. Create your own subscriptions, playlists, and then organize all of your favorites. It also offers podcast channels, provided by Apple iTunes.

BUILT-IN ROSE APP STORE: You can simply update these applications to the latest version from the RoseStore App.

You can enjoy seamless streaming through the network. Also, you can connect the RS201E to a smartphone, computer, tablet, or NAS and stream A/V files stored on your devices through Airplay / DLNA Service.

RS201E provides the latest I/O interfacing and connectivity on the market for connecting with all your external equipment (DACs, Amps, Speakers, etc.). Supporting a variety of input and output terminals, RS201E completes the ultimate connectivity with Line In PreAmp Out, Digital (optical) I/O, Speaker Out, Headphone Out, and HDMI compatibility with TVs. 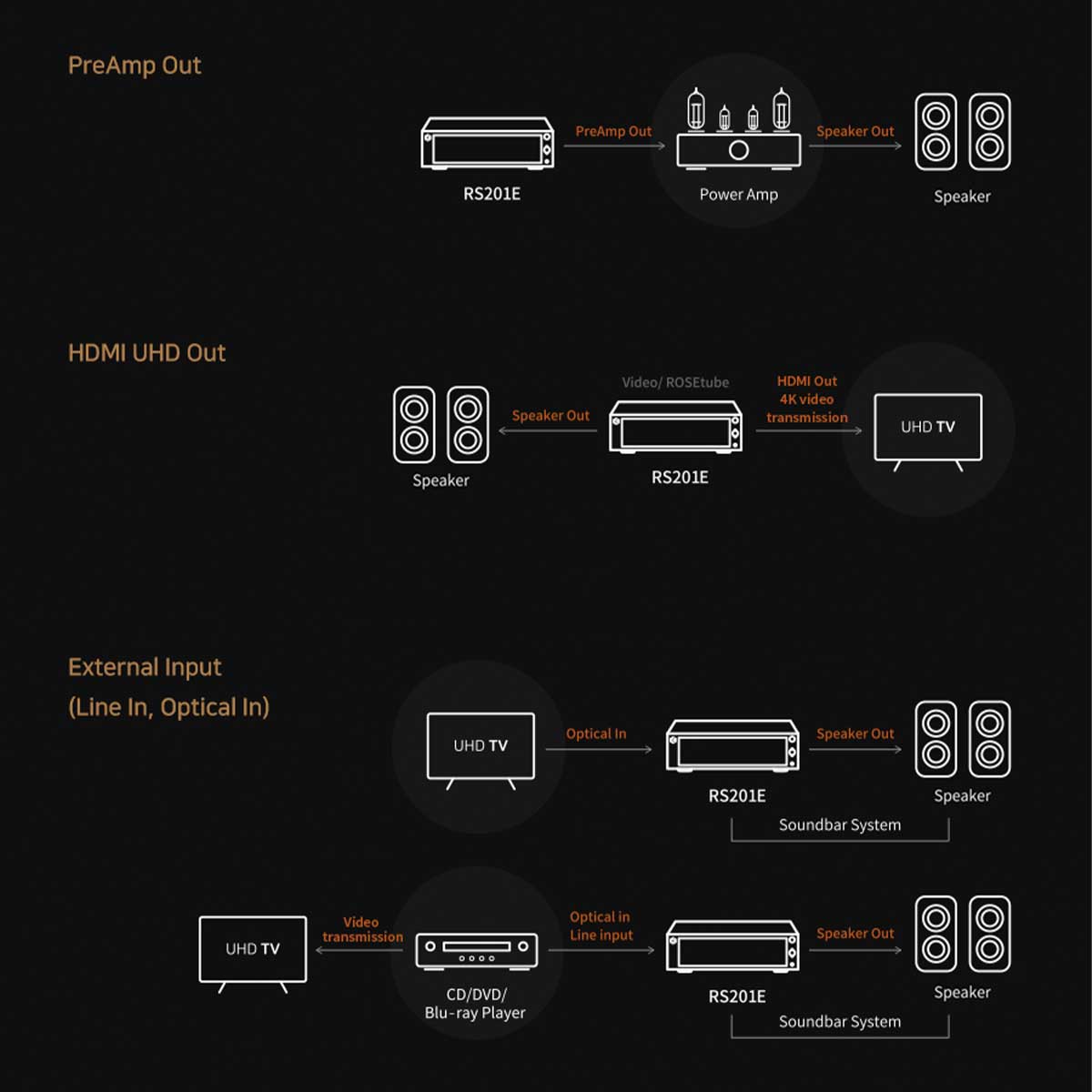 RS201E is compatible with multiple devices via several kinds of terminals. Connect all of your media sources, including USB Micro SD, SSD input, and NAS through your network. Line In as Line/Optical In provides easy connection with CD, DVD, and Blu-ray Players to your TV through Optical In.