Recently, Marantz introduced a brand new line of home theater receivers consisting of 6 models ranging in price from $549 to $2,999. We thought it might be helpful if we took a closer look at some of the more popular models in the lineup and compared them in order to help you select the best one for your system.

What They Have in Common

Marantz products are all about audio quality. When you compare them to other brands of home theater receivers, you may find that they have slightly fewer features at the same price level. This is because Marantz has made the decision to put the money into the sound.

When you look closer, you’ll see that they have bigger power supplies and more robust amplifier sections than most. While many brands have gone to chip-based amps (especially for the surround channels), all Marantz receivers have high-current, discrete class A/B amplifiers for every single channel. This gives them the ability to handle the dynamics of a big action movie or concert video without giving up. Marantz receivers have a very warm and musical sound compared to most home theater receivers.

All Marantz receivers also have HEOS built-in. Developed by Denon (now a sister company to Marantz), HEOS is a wireless music ecosystem. Their line has all-in-one speakers, amplifiers, and soundbars and the functionality is also built-in to all Marantz and Denon receivers. 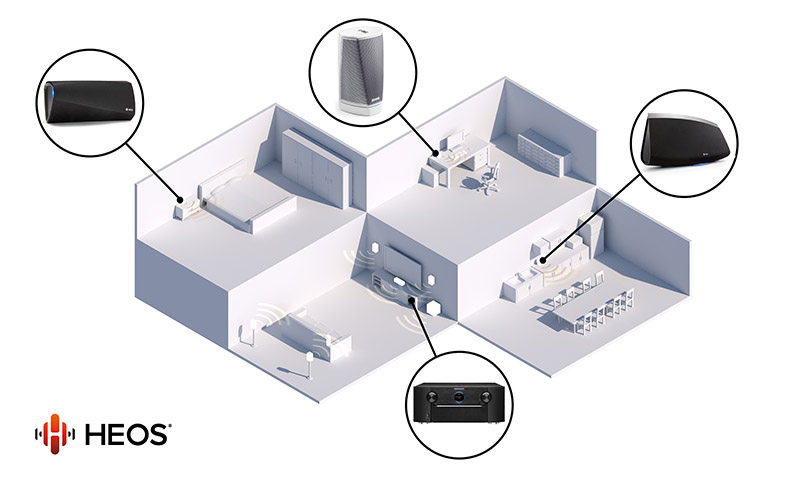 This means that you do not have to add another box to integrate your media room or home theater into your whole house audio system. Simply choose the room in the HEOS app and the music starts playing. Having HEOS built-in also means that you can send the audio from your cable or satellite box to the rest of your house. Think of the Super Bowl parties!

Audyssey is a Room Correction technology that is also included in all Marantz receivers. Considering the fact that the room itself is the biggest factor that affects how your system sounds, we strongly believe in these new room correction technologies. Audyssey does a great job correcting issues in tricky rooms.

We also like the fact that deep in the menu of every Marantz receiver is an HDMI diagnostic tool. This can even tell you if you have a bad HDMI cable in your system, which is incredibly helpful for troubleshooting.

Finally, all Marantz home theater receivers come with a 3-year manufacturer's warranty. Now let’s look at what you get as you move from one model to the next.

The Marantz NR1508 is your basic, great-sounding home theater receiver. It has 5 channels of amps on board, each rated at 50 watts per channel. You’ll get 5 rear HDMI inputs and one on the front. If you wish to upgrade the amp for your main speakers, it has preamp outs for the left and right channels, plus it has a subwoofer output connection. The NR series is also in a smaller height chassis than most receivers, however, it still weighs in at a beefy 18 pounds due to its robust amp section.

The NR1508 is a great sounding home theater receiver if you are looking for a no-frills, 5.1 surround sound system. For its price of $549, it sounds fantastic. Just keep in mind that there is no real room to grow with this receiver beyond 5.1. You can’t add more surround speakers, Dolby Atmos, or a second zone of audio.

The jump up to the Marantz NR1608 receiver for $200 gets you quite a bit more. For starters, you’ll be able to enjoy built-in Dolby Atmos and DTS-X. The NR1608 gives you two more channels of amplification for a total of seven. It has the same slim-line chassis as the NR1508 and weighs in at a little over 18 pounds.

There are also two more HDMI inputs for a grand total of 8 and it gives you a preamp output for a second audio zone. If you ever think you might want to enjoy Dolby Atmos, we highly recommend you consider the NR1608 over the NR1508.

When we move into the SR series, we jump up into a full-size chassis. The Marantz SR5012 receiver has the same number of channels as the NR1608 but doubles the power output on each to 100 watts per channel. Like the NR1608, it supports Dolby Atmos and DTS-X but adds preamp outputs for all of its seven channels. This means you could later add a bigger amp for any of the channels. You also get 7.1 channels of input, in case you have an SACD player you want to incorporate into your system. It also comes with a second HDMI output for another TV.

The Audyssey system in the SR5012 is also a step up from the version we have in the NR series. It has more correction points and includes Dynamic Volume, which will keep loud commercials from jumping out at you! If you want to really geek out fine tuning your sound, for $20 you can also purchase the Audyssey Editor App. This lets you perform some very detailed fine-tuning of the Audyssey room correction.

If you pull the cover off the SR5012, you’ll notice a very large amplifier power supply. This guy really sounds great for its $999. With its better amp, all the extra outputs, and improved Audyssey, you can easily justify the $250 jump over the NR1608.

Our final model in this comparison is the feature-rich Marantz SR6012 receiver. For most systems, this gives you everything you should need. It adds 2 more channels of on board amps at 110 watts per channel each so you can do Dolby Atmos 5.1.4 or 7.1.2. It also has processing built-in for 11 channels. This means that if you just add a power amp, you can create a maxed out 7.4.2 Dolby Atmos system.

A really cool feature of the SR6012 is the way you can reassign amp channels. Let’s say you have a great pair of music speakers you want to put a really big amp on. Get yourself that big amp, then reassign the left and right speakers in the SR6012 to that extra pair of Atmos speakers for a full 7.4.2 system with a rocking amp on your main speakers.

For the vinyl lovers, the SR6012 includes a phono input as well.

The SR6012 also has what they call “digital zone 2 conversion.” This means that any input (including HDMI sources) can be available not only to its zone 2 output but to the Heos ecosystem as well. Since there can typically be a delay between receivers and whole house zones, Marantz delays the signal going to those zones so that they are in sync with the receiver. What an incredibly smart feature to include!

The Audyssey system in the SR6012 moves up to MultEQ XT32, which provides even more points of control. Just like with the SR5012, you can also get the app to really dive in.

With its great input and output flexibility, the SR6102 will never leave you wishing you had bought the next model up. It truly has all the connectivity to expand with you as your system grows. It is also built incredibly well.

Even though it is only rated a 10 watts more per channel than the SR5012, it weighs in at 28 pounds. The beefier amplifier section adds an additional 6 pounds over the SR5012 and providing superior audio performance.

Choosing the Right Marantz Receiver for You

Of course, the most important thing to consider when choosing a home theater receiver is how you’re going to use it. It’s not just about finding the best receiver available, but which one gives you everything that you need now and into the future if you plan to grow your system.

We do think it’s important to mention that most people keep a home theater receiver for around 10 or more years. Unlike many electronics these days, Marantz receivers are not some disposable piece that you will replace in a year or two. Receivers like these are a long-term investment in your system, so be sure to get something that has everything you will need. If you read through this article and still can’t decide, please feel free to chat with us -- we’re always happy to help!

We’re confident that whichever Marantz receiver you choose, you will love its great sound and enjoy having it as the brain of your home theater or media room for years to come.