It's been over 70 years since Paul Klipsch created his first speaker in a tiny shop in Hope, Arkansas. The Klipschorn loudspeaker represented his goals of recreating the feel of live music in your home. He built the Klipschorn adhering to four design principles: high efficiency, low distortion, controlled directivity, and flat frequency response.

Paul Klipsch went on to design many other speakers using these same principals. Due to demand from loyal listeners, Klipsch has brought many of these classic speakers back under their Heritage Series. To be a part of this classic speaker series, the original speaker had to be designed by Paul Klipsch himself.

While the Klipschorn gets a lot of attention being the flagship of Klipsch speakers, some of the other models offer a lot of its sonic characteristics at a much more affordable price point while also taking up a lot less space in your listening room. Today’s review will compare two of their most popular models, the Klipsch Forte III and the Klipsch Heresy III.

Similarities Between the Forte III and Heresy III

The original Heresy was introduced in 1957. At this time Paul Klipsch was designing it as a center fill speaker for the bigger Klipschorns. The Klipschorn is a full horn design with even the woofer being horn loaded. The Heresy used a horn-loaded tweeter and midrange driver with a conventional woofer. One of Paul’s friends at the time told him this new design violated his principles and was pure heresy. Paul never skipped a beat and aptly named the speaker the Heresy model.

The Forte came out many years later in 1985 and quickly became the best selling speaker Klipsch had ever made. The Forte is a larger version of the Heresy with a horn-loaded tweeter and midrange, conventional woofer, with the addition of a rear firing passive radiator. Klipsch brought it back in 2017 with the Heritage series.

Both of these speakers share several common attributes. All Heritage series speakers are completely designed and assembled in Hope, Arkansas. Every single speaker is built to order by craftsmen who in some cases have been making them for decades. They both use furniture grade wood veneers with choices of walnut, cherry, or black ash. The Forte also has an option of oak. Not only do they use great veneers, but each speaker pair is also grain matched with panels that come from the same timber. A pair travels through the factory as a pair and receives sequential serial numbers. You will be able to hand these down to the next generation, they are made to last!

The Forte III and Heresy III are very efficient with the same rating of 99db. In the world of speaker efficiency, a rating like this means a good 20-watt amp will provide all the power you will ever need! You’ll get dual 5-way speaker binding posts for bi-wiring or bi-amping on both models as well.

Physically both of these are considered floor standing speakers, although with the Heresy you do have the option of removing the angled base and putting it on a shelf, but that is going to be one heck of a large shelf. The amount of floor space you need to allocate is very similar on each model. The Heresy is 13.25” deep and 15.5” wide while the Forte III is 13” deep and 16” wide. To us, the Heresy looks smaller in the room though. It’s something about the way it tilts and it's slightly under 2’ height that makes it seem a lot smaller than the 36” tall Forte III. You’ll need some muscles to move around the Forte III as it weighs in at 72 pounds. The Heresy III is a little easier to manage at 44 pounds. 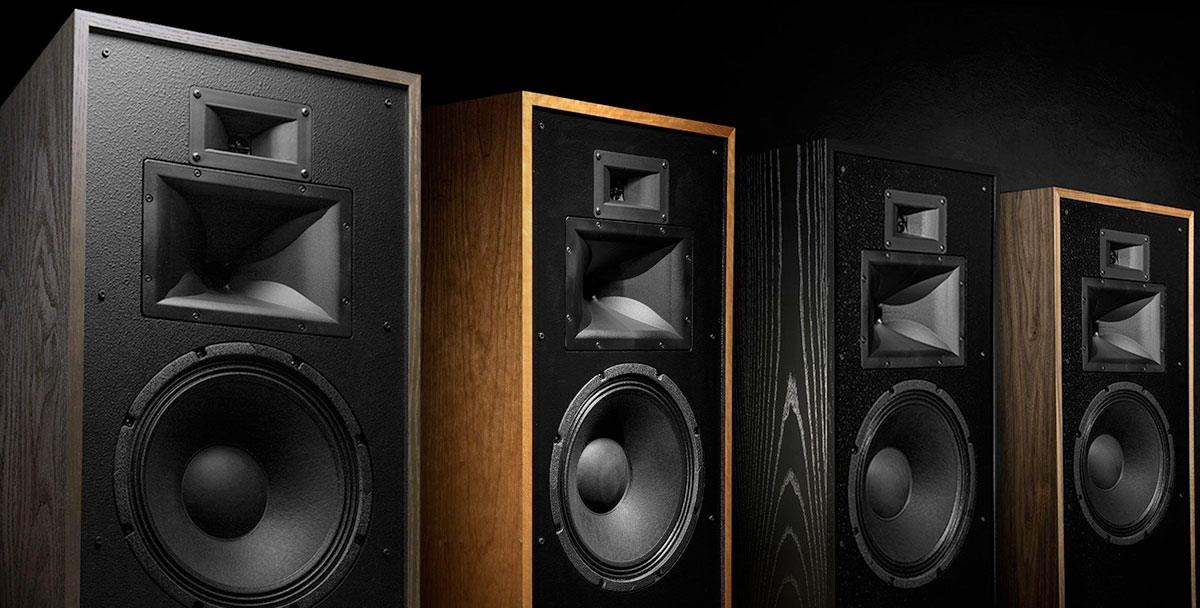 Technical Differences Between the Forte III and Heresy III

While both speakers are a three-way horn design, the speaker components used in each model are different.

Klipsch has come up with a brand new horn design for the midrange driver on the Forte III. This new patented driver ups the ante on midrange dispersion. The woofers in both are very similar, however, in the Forte III, it is augmented with a 15” rear firing passive radiator.

When comparing speakers you have to be careful to make sure you compare at the same volume level. This was very easy with the Heresy III and Forte III as they are both exactly the same. We set them up in one of our audio rooms. We used a Prima Luna Proluge Premium integrated amp, which is a low power, all-tube integrated amp. The source was a trusty Cambridge Audio CD player. Everything was connected up with entry-level Transparent cables. We then set the speakers up asymmetrical on the same wall so they were the same distance apart and toed each pair in slightly. We used a tape measure to ensure they were identical both in distance apart and off the back wall.

We started out our listening low key and moved up from there.

The first CD was from Flim and the BB’s called Tunnel. We used the 4th track, Mermaid. This cut has a piano, a clarinet that is very closely miked, and some percussion. The Heresy III portrayed the piano very well with natural tones and good dynamic impact. When the clarinet came in you could hear the tones of the wood body well. The light percussion sounded realistic and clean. All and all a very enjoyable sound. We then switched to the Forte III and started the track over. We could immediately hear more definition on the piano, plus it sounded much bigger. There were far more harmonics on the Forte III with the clarinet as well and both the piano and clarinet were more out into the room. The light percussion sounded pretty similar between the two and since there is not much deep bass in this particular track we could not tell a big difference there.

Next was Norah Jones, the Come Away with Me album, and the cut Don’t Know Why. This has a very rhythmic, plucking bass line and is a more dynamic track than the first test. Since we were on the Forte III we started there. The plucking of the bass and deep bass definition was just astounding for a $4000/pr speaker. The rhythm of the cut also had us tapping our toes to the music. Norah Jones was dead center and her voice was big, rich and smooth. When we changed to the Heresy III, the difference was pretty big. You could tell they just do not go as low, nor are they as defined in the lower end. Those rich harmonics we heard in the voice were there, but not nearly as easy to hear, but the interesting thing that occurred was we did not feel that engaged with the music like the Forte III. We flipped back to the Forte III just to be sure hearing it twice was not tricking us, but that emotional involvement was right back. We also noticed the whole presentation of the sound felt small on the Heresy compared to the Forte III. We’d have to say this track really showed off the benefit of the 15” rear passive radiator and improved midrange horn on the Forte III along with its taller size which seems to give you a much bigger presentation.

Back on the Forte III, we loaded up the Ingido Girls, Shame on You, from the Shaming of the Sun CD. This track is big, fast-paced, and very dynamic. It can also really get your toes tapping with the right gear. The Forte III’s were just spectacular here. Bass hit us in the chest with the percussion sounding super realistic. This track was just a blast to play on the Forte III. The sound was big and filled up the whole room, even extending outside the speakers. Moving over to the Heresy, we were still satisfied with the presentation of a fun rock cut, but again, less bass, less midrange definition, and not quite a much toe-tapping. Again the soundstage presentation was much smaller.

Our final cut is one that we suspect many people have used to test out classic speakers like these: Whole Lotta Love from Led Zepplin II. We cranked up the volume a bit for this one and let it rip on the Heresy III. This track was a lot of fun on the Heresy III. If we had not been switching between them and the Forte III, we would have probably been very happy, but we had so we could not wait to flip over. When we got the Forte III going we noticed a huge difference in bass impact. If you know this track, about 90 seconds in you get a lot of percussion sounds. These were also clearer and more open on the Forte III. It does have a better horn tweeter and midrange, so no surprise there. The next thing that happens on the track is while the percussion stays rock solid, the guitar and vocal lines move all over the place as they really played around with the mix. When this was happening on the Heresy III, it just sounded like the guitar moved from one speaker to the other, like an old stereo effect. On the Forte III, we felt a much more three-dimensional presentation,with it even sounding like the sound was coming from outside the speakers. The light cymbal work also sounded less strained and more effortless on the Forte III. When the music comes back together at the end, things just sounded amazing. This $4000 speaker was giving us rock n’ roll goosebumps. 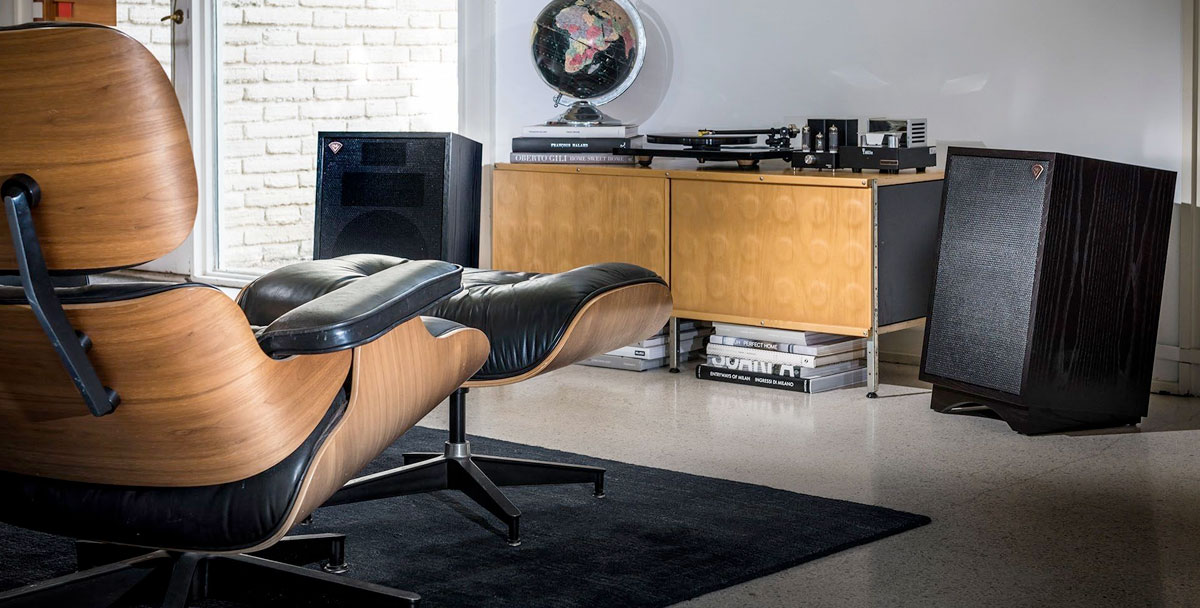 Both of these Klipsch Heritage speakers are a lot of fun to listen to. If you get the Heresy and never hear a Forte III, you will likely be happy, although we do wish it had a bigger soundstage. We do feel the $1,400 total cost jump to the Forte III is worth every single penny if not more. They are just better in every aspect from top to bottom. The top end is smoother and more effortless, the midrange difference is huge in our opinion and you will not need a subwoofer with them, which we think you will want to have with the Heresy III. The whole presentation of the sound is much bigger, deeper, and wider with the Forte III and somehow they kept our toes tapping a lot more than the Heresy.

If you have any other questions, please feel free to send us a message or chat with us. Make sure you check out our blog, which is full of helpful information, product reviews and videos.

If you live in the Raleigh or Charlotte, North Carolina area, we encourage you to visit our world class showrooms.