Ever since the 800 series was first introduced in the 1970’s, they have been a favorite of recording engineers and audiophiles the world over. They’re true-to-life sound and lack of fatigue over long listening sessions make them the perfect speakers for the world's best studios.

In celebration of their 50th anniversary, Bowers & Wilkins released the new 800 series. Over 8 years in the making, these speakers are the biggest overhaul B&W has ever made to a speaker line. While the title of this blog refers to 50 reasons to give them a shot, there are really 868! The engineers at B&W have changed all but 8 parts in the 800 series, painstakingly improving every aspect of these iconic speakers. All that remains of the old speakers are 4 binding posts, 3 capacitors, and the diamond tweeter. That's it! 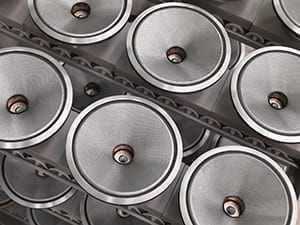 The first thing you may notice at first glance is that the signature yellow cones are no more. Instead, B&W has replaced them with a proprietary material they call Continuum. The Audio Advice team has a great relationship with Bowers & Wilkins. We attended the release party for the 800 series while we were at CEDIA and were privy to some exclusive demos, but even we couldn’t crack their team when it came to giving up the secret sauce. Even our rep insists he doesn’t know what Continuum is made of.

What we can tell you is that it’s a composite, woven material, that it’s grey instead of yellow, and upon first listen it’s clear that this technology is miles ahead of Kevlar.

More Changes to the 800 Series

The cabinets are based on the matrix technology Bowers & Wilkins has been using in its speakers for years, but this time, it’s a totally different design.  On the 803 and 802 there is actually a metal sink on the back of the cabinet to dissipate any unwanted energy. 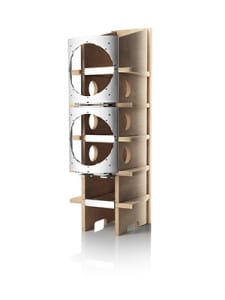 If you are like me, you might really enjoy moving your speakers around in small increments to get things just perfectly tuned to the room.  I can remember like it was yesterday doing this in 1987 with my first pair of original B&W 802’s.  All of today’s current speakers benefit from spikes that couple them better to the floor and these guys are no exception.  However, it's always a challenge to lift up the speaker, install the spikes, without moving them from that perfect position.

B&W has solved this in a super elegant manner.  There are four little wheels on each corner of the base.  Once you have the speaker in the right spot, you just spin a big ring, the wheels go up, and a spike goes down precisely where you want. Just ingenious!

One of the two things that did not change was the diamond tweeter diaphragm, which in my opinion has always been one of the best tweeters on the market.  The tweeter housing though is much improved over the current model.

This is all great, but how do they sound!?

I could go on and on about all the technical details, but the most important thing about a speaker is its sound!  At a buying group meeting in Chicago, a few of us B&W dealers had the opportunity to get an advanced screening of the new series.  I got there early to be first in line and grabbed the best seat.

They played the new 805 and then the new 802.  Doug Henderson, President of B&W, started off with a very rhythmic cut from Bruno Mars.  About 2 minutes into it, one of my friends who was standing off to the side said, “look at Leon, he is really getting into it!”  He was right! I was totally immersed in the music, eyes shut, foot tapping.

One of the main things that I feel gets you emotionally involved in a piece of music is getting the timing right.  This requires a coherent speaker with zero phase issues.  When it’s right, I guess my body, or more specifically, my feet take over.  The new 800 series has coherency to a degree that is as close to live music as I have ever heard.

When using 3 different materials for drivers (diamond, Continuum, and their new Aerofoil woofers) it’s quite a challenge to get them to sound as one.  A round of applause should go out to the engineers in the UK. They pulled it off incredibly well.  You always feel like the sound is coming from a single source with no difference in the tonal character across the spectrum.

As with the past 800 series, the separate head unit for the tweeter and midrange reduces diffraction to a minimum which gives you a huge, palatable sound stage. This is even more true in the new series. There was not a single cut Doug played that did not make me feel like I had musicians in front of me.

A Flat Out Revolution

I feel the new 800 series, especially the 803 and 802 are just a flat out revolution - especially at their price point. While $17,000 and $22,000 a pair is not inexpensive, you have to spend at least 3-4 times as much for comparable performance from other brands of speakers. Even then you may still not hear timing like these guys can reproduce.

We invite you into our stores to hear these guys - they are incredible!

If you have any other questions, please feel free to send us a message or chat with us.