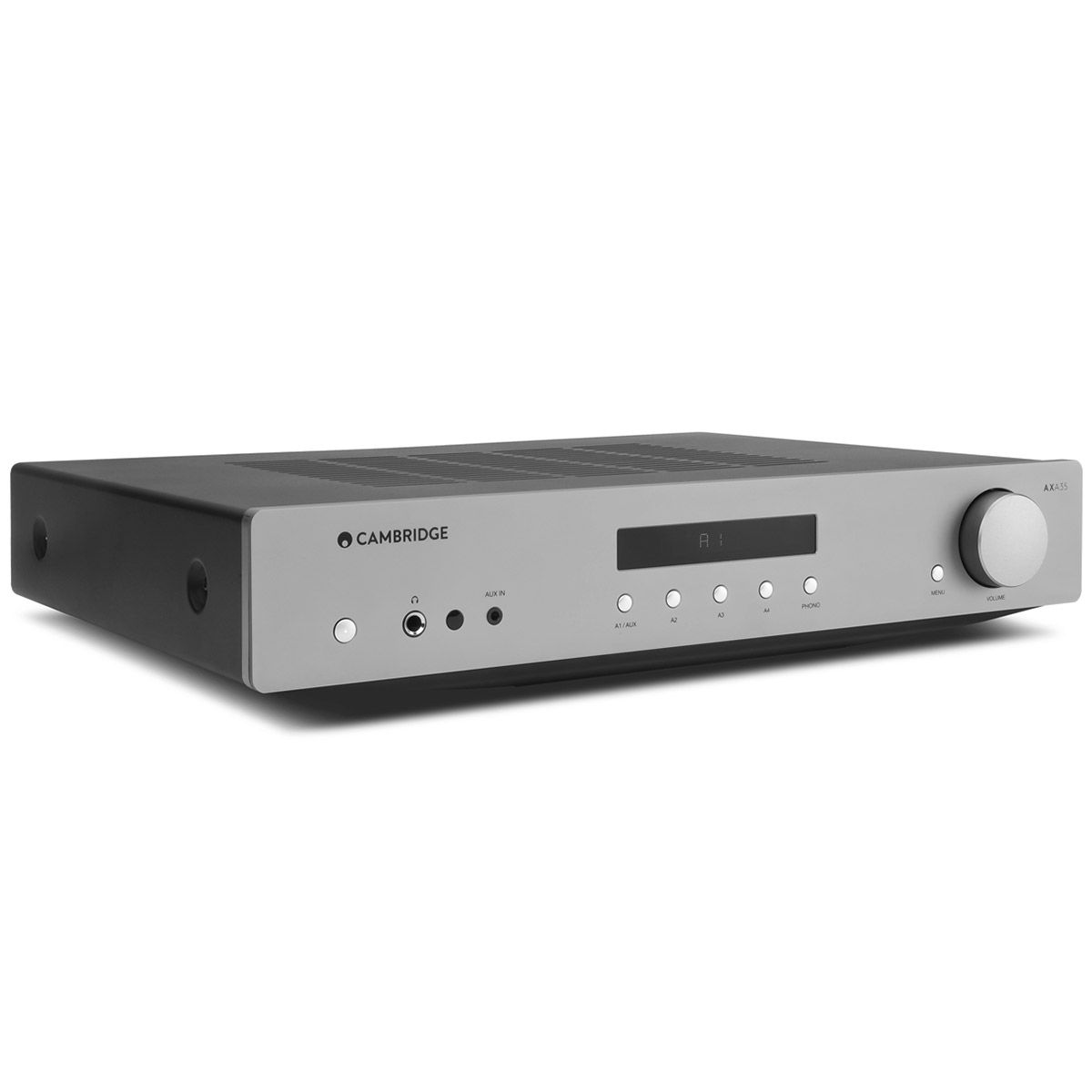 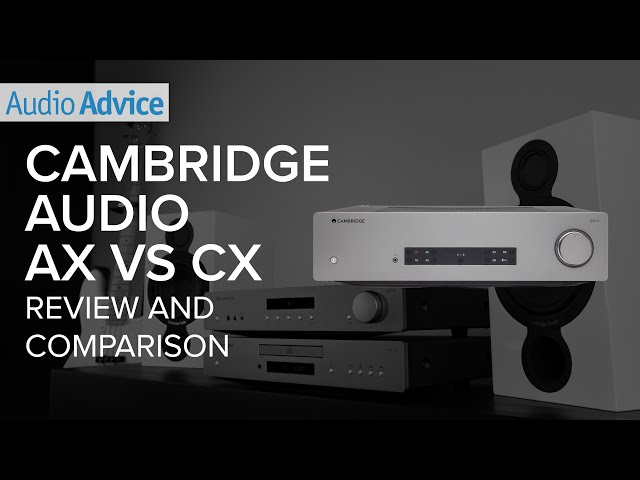 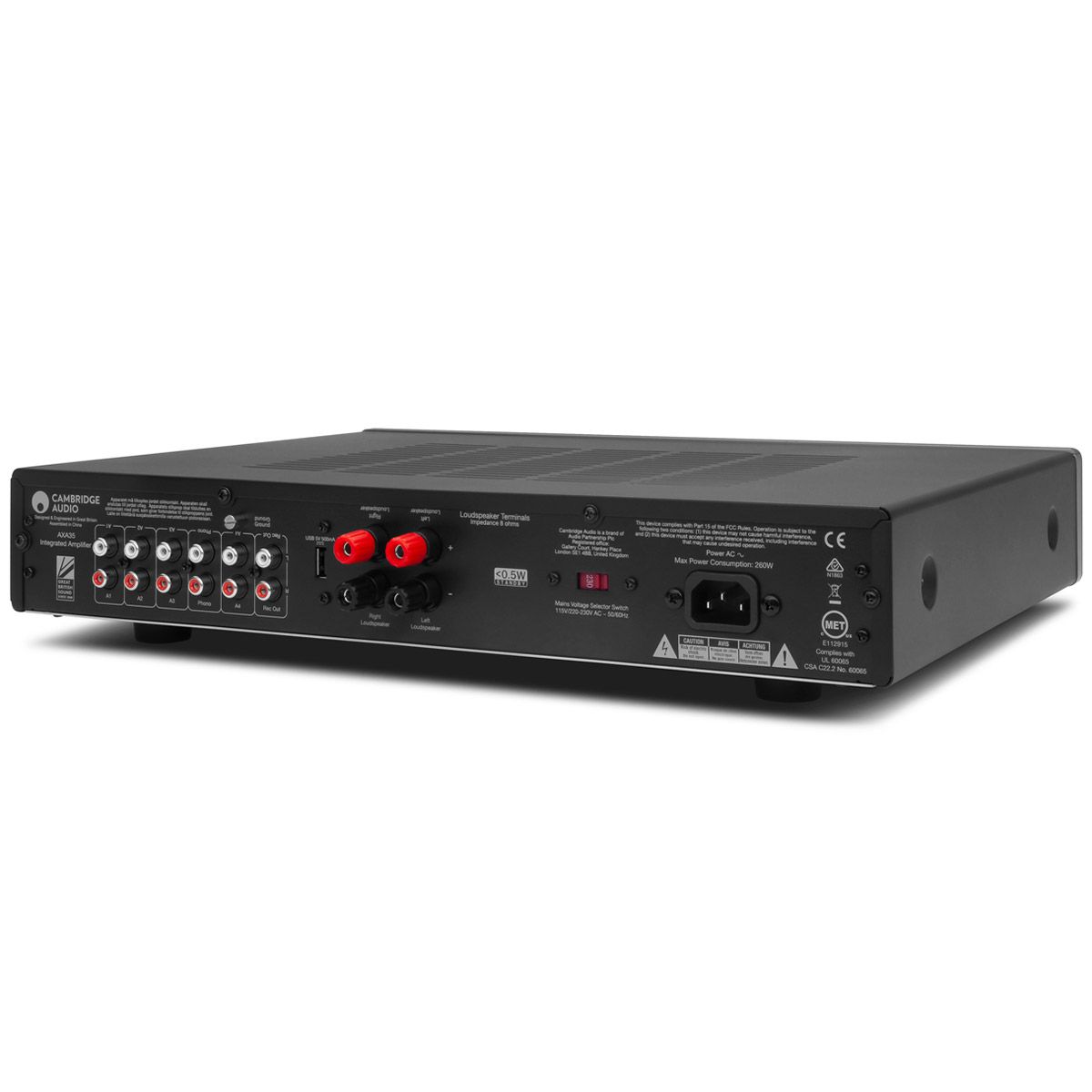 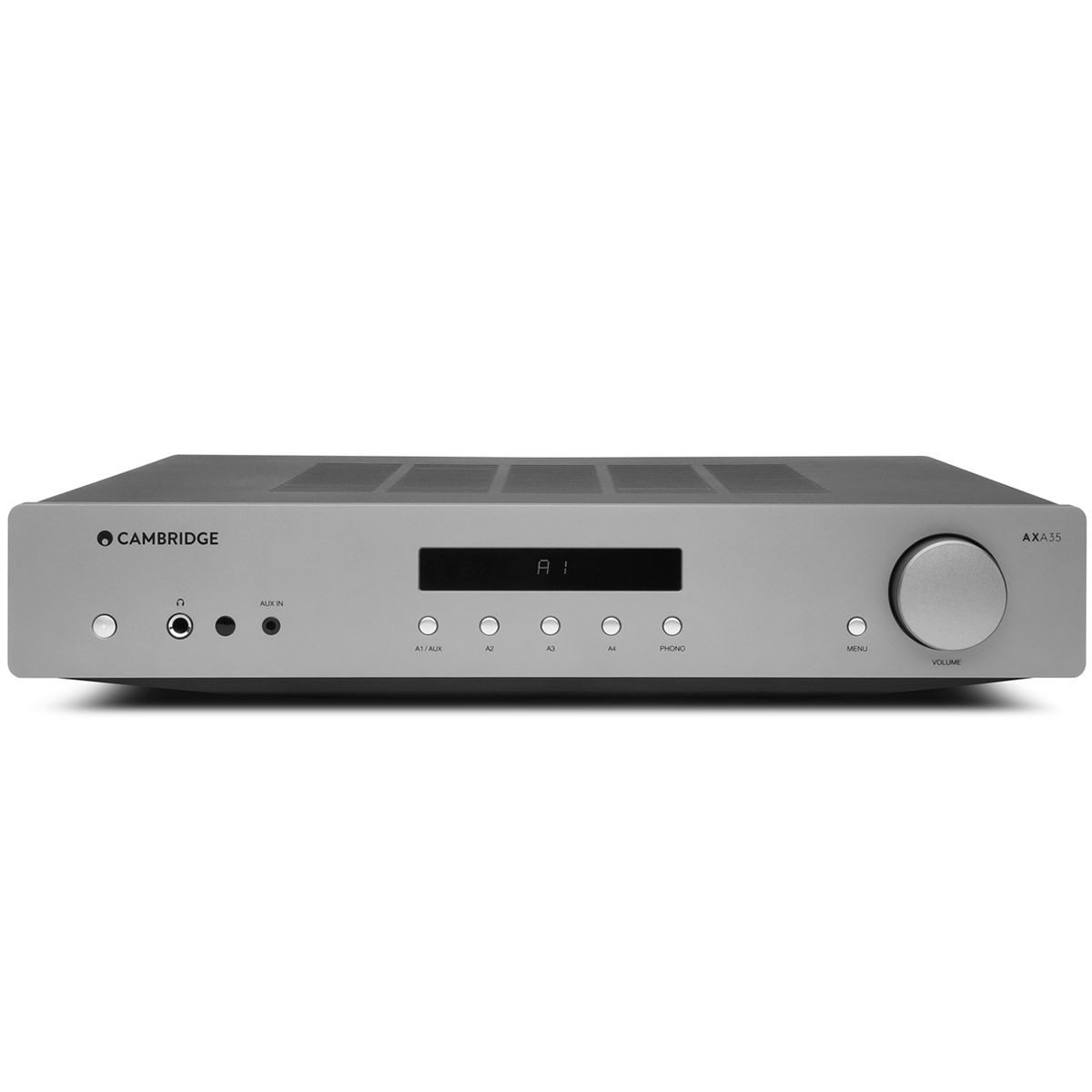 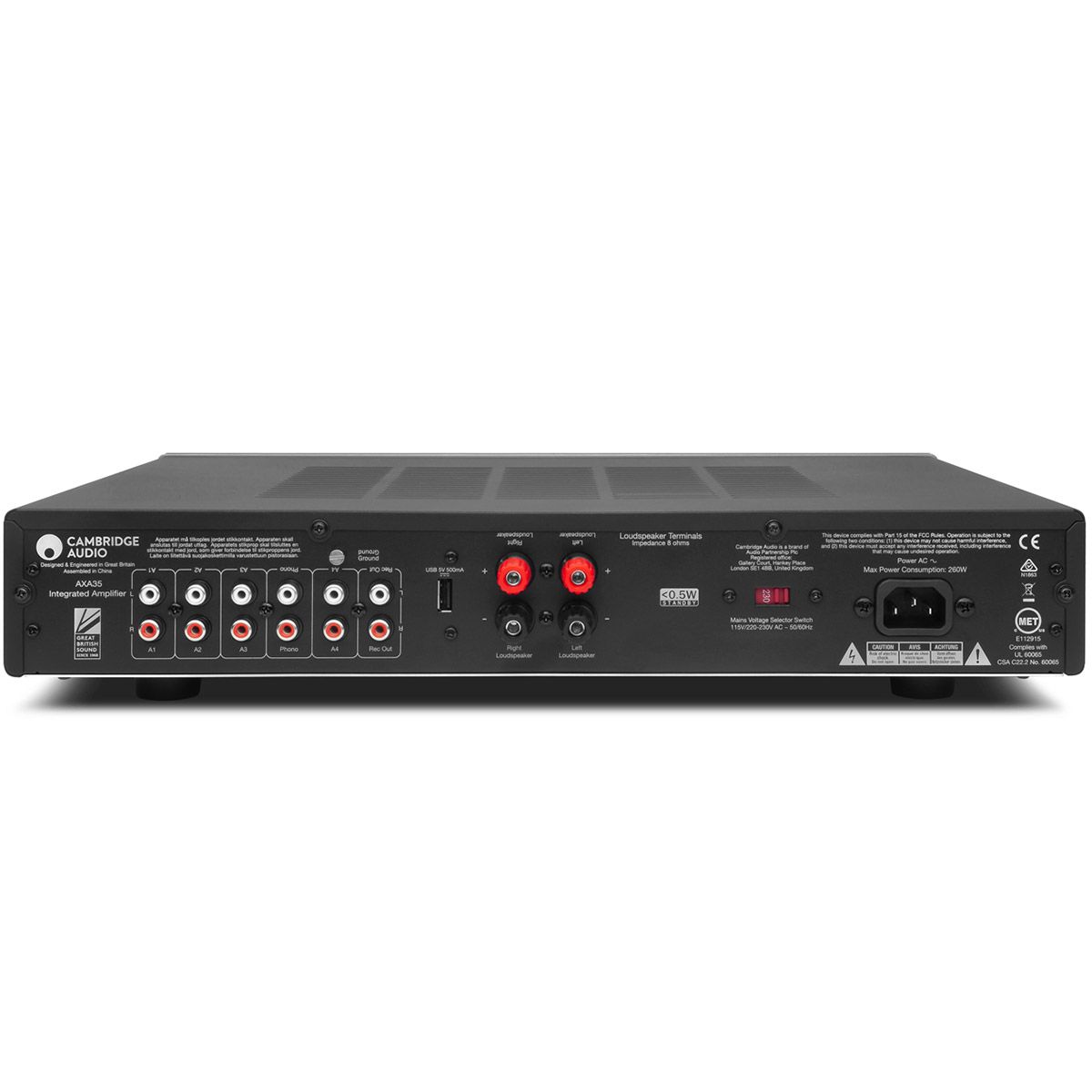 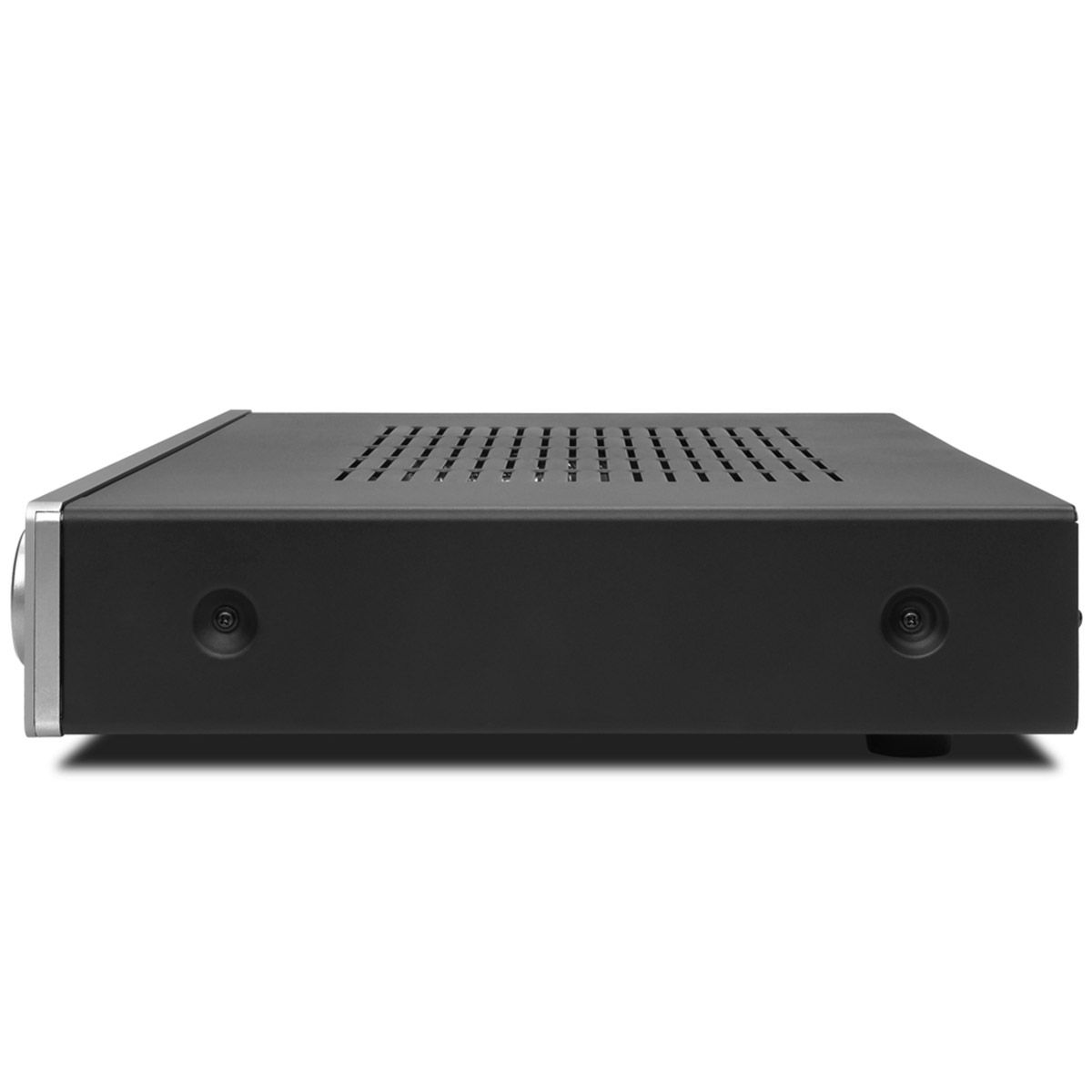 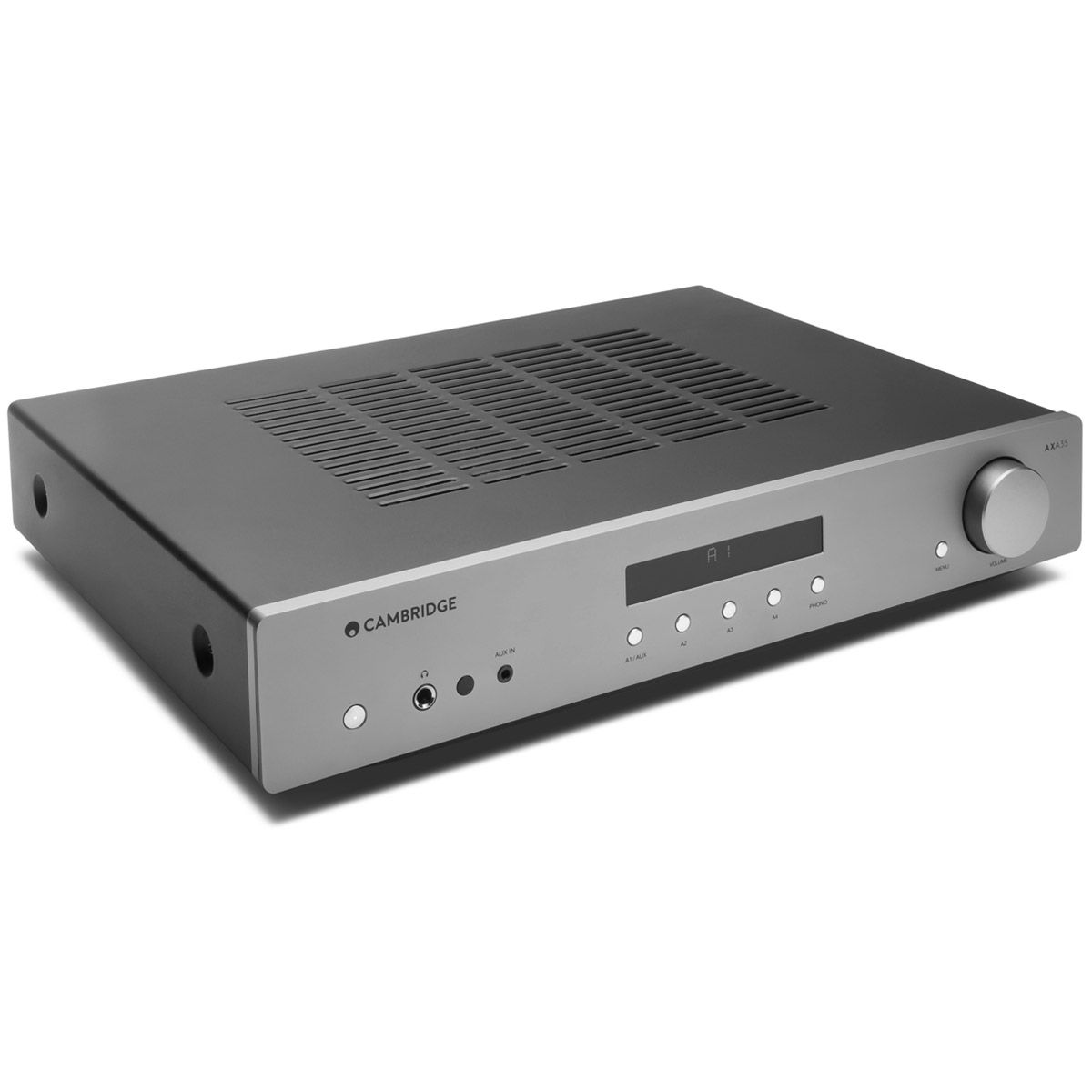 The AXA35 boasts 35 watts of power per channel, an integrated moving magnet phono stage for turntable enthusiasts, a white display screen, and a headphone socket for private listening sessions.

We have never heard an integrated amp at this price sound so good. It drives most speakers with ease and has a warm, effortless sound.

Along with a Bluetooth streaming optional input and 5 Aux, you even get a great MM phono stage. Cambridge is known for their great value phono stages and you get an excellent one in the AXA35.

When we popped the cover, we were super impressed with how well this integrated amp is made. Stunning for $350!

The 1960s brought us a lot of great things out of England related to music.  Whether you are a fan of the Beatles or Rolling Stones, you have to admit it  was a wonderful time for music.  It was also the time of the birth of what has become known in the audio world as “British Sound.” In the late 1960s the sound coming off records produced in England had a very pure feeling, with no boosted bass or tipped up treble. Most British HiFi companies at the time did their best to produce gear that added zero coloration to this classic, pure sound.

Cambridge Audio came onto the scene in 1968 and, as you might have guessed, was started by a group of techies at Cambridge University.  They made the world's first integrated amp that used a toroidal power transformer, a first of the time, but which is now the standard in high performance audio. Fifty years later, Cambridge Audio still holds true to their goal of making products that are true to the music with no coloration.

To keep their team members fully engaged in what live music should sound like, they host a live concert every Friday afternoon in their facility, which is pretty cool for an audio company or any company for that matter. They also are dedicated to being as green as possible in their manufacturing.

Cambridge Audio has always been known for the great value HiFi products and we were lucky enough to get our hands on a pre-production model of a new, entry level integrated amp that will ship soon, the AXA35 which is the focus of today’s review.

Cambridge Audio gear is designed and engineered in their UK facility, then assembled in their factory in Asia. Unlike many brands that farm out to the least expensive supplier, Cambridge has used the same factory for the past 20 years, ensuring a great result.

The AXA35 is part of an entirely new line up from Cambridge Audio called the AX series. This will replace their very successful Topaz series of products. Since Topaz was introduced many years ago, Cambridge has come out with CX and Edge models above the Topaz range. AX takes much of the engineering they learned when designing CX and Edge and puts it into an incredibly affordable package.

The first thing that struck us about the AXA35 was how clean it looked. It is the standard audio component size in width at just over 17” and is about 3” tall. We love the brushed light metal front panel with its rounded corners and very clean display. Cambridge Audio continues to amaze us at how well their products fit together. All of the buttons feel solid, the volume control knob is perfectly centered with zero play and the chassis fits perfectly. They also have added a design concept from the CX series. The front panel has a curved piece on the bottom that helps to isolate the chassis and gives the unit a look like it's floating on your shelf. This little integrated amp could be priced at 5 times what it is and it looks like it!

The design also enables you to start using the unit without having to read a manual. Everything is well laid out with easy-to-understand controls. The connections on the rear panel are solid and rather than cheap push pin speaker connections, you get real binding posts for a solid and tight speaker cable fit. Cambridge even prints the labels for the rear jacks both right side up and upside down. This comes in really handy when you are bending over the top making connections, a great little touch.

All and all, it is what we have come to expect from Cambridge Audio. Every time they come out with something new, they exceed everything our expectations.

The AXA35 is made for the person who wants to assemble a great sounding HiFi system without breaking the bank. It has everything you need to get started. There are 4 analog audio inputs on the rear and a mini analog audio input on the front. You also get a full-sized headphone jack on the front panel.  A great surprise is the inclusion of a phono stage for moving magnet cartridges. The new Cambridge Audio Solo phono preamp is one of our favorites and it’s clear some of the tech in the Solo filtered into the AXA35. We did have one little nitpick on the back panel phono ground screw. It is very smooth with a straight slot screwdriver insert. This means there is no way to get it tight without using a screwdriver, turning set up into a multi-handed operation. We would have preferred a knurled knob. You’ll only have to do this once, so it's not a big deal.

To keep the front panel as clean as possible, yet offer ease of use, each source has its own button, no need to toggle through, but the other controls are accessed by pressing the small menu button. This brings up bass, treble, and balance controls.

As usual, we popped the cover off even before listening and found a beautifully laid out integrated amp. One side has a very large and heavy toroidal transformer. The preamp section is on its own board, which connects directly into the rear panel jacks with no wiring. The power amp circuit board has large output devices mounted to a substantial heat sink. We also liked the big filter caps supporting the amplifier section. Wiring from there to the speaker banana plugs is heavy gauge speaker wire.

Cambridge Audio rates the power on the AXA35 at 35 watts per channel, but when we look at how the amplifier section is made, we think that is one of the most conservative power ratings we have ever seen. Of course the proof comes in listening, which we get to in a minute.

The CX and Edge series of integrated amplifiers are favorites at Audio Advice for their clean, natural sound and ability to drive most speakers easily with no sense of strain. We reached out to Cambridge to try and find out how much of the CX and Edge tech had made it into the AX series and they jokingly told us that was a bit of a secret. Needless to say, we suspect they have layered in a lot of new tech into the AX series.

After popping back on the cover, we were very anxious to hear how this little integrated amp performed. We were thinking back to about three years ago when we first decided to give Cambridge gear a listen and they had shipped us in their CXA60 integrated amplifier for testing. We were so excited to get it playing some tunes to test out that we opted for the first open spot in our store and plopped it down. This happened to be a system with a Cambridge Audio CD player and a pair of $2500 B&W 704S2 tower speakers. The 704S2 is one heck of a great speaker, but one that we have found requires a good amp to get them jumping.

Being in a sentimental mood, we grabbed a CD of the first Dire Straits album, released in the US the week before Audio Advice opened its doors in October 1978. There is a feeling you get in the audio world when you have been playing with audio toys for decades that comes when you hear a new piece of gear and it just sounds right. Within the first few bars of Sultans of Swing, we knew this new AXA35 was going to far exceed our expectations! The big surprise was just how well it was pushing the B&W 704S2 speakers. We turned up the volume to a very loud level and there was no sense of strain or harshness at all which is just astounding for a 35 watt, $350 integrated amp. Better yet, we were tapping our toes to the music, a sure sign the amp has a musically engaging sound.

Stereo imagining was excellent, although not quite as precise as the Azur 851 Cambridge integrated amp we had in the system before. Of course, the Azur 851 is sold at a higher price point of  $1500. We also noticed on the 704S2 the bass got a little out of control as we cranked up the volume compared to the Azur 851, but that is by no means a fair comparison. This little jewel of an integrated amp will likely be connected up to a much easier to drive speaker in most systems.

We discovered this last excellent quality as we were switching cables around. When we turned down the volume, we noticed it had very fine adjustments as we lowered it. Many inexpensive products have a problem that when you lower the volume to very low levels, one channel will either be louder than the other, or one will drop out completely before the other when you are at that last level before zero volume. The AXA35 was perfectly linear in both channels until they both went to zero, most impressive for a $350 integrated amp!

We do not think we have ever heard anything in the store for $350 that comes anywhere close to the sound of this new integrated amp from Cambridge. Heck, we have played $1000+ home theater receivers that did not sound as good in stereo. It is just simply bewildering to us how Cambridge Audio can deliver so much great sound for only $350! We know it has to be the huge power supply and some of the magic they filtered in from their learnings when they made the fantastic Edge integrated amp.

If you are putting together a two channel HiFi audio system in the $1000 to $2000 price range you should seriously consider the AXA35. It’s great sound for the money will allow you to put a good percentage of your budget into your sources and speakers, which is always a great idea. We can not think of any better integrated amplifier near it’s price, highly recommended. For those of you who have more in your budget to spend on your amplifier, you may want to consider the Cambridge Audio AXR 85 which we review here.